Doughty: “We need to have a sense of urgency” 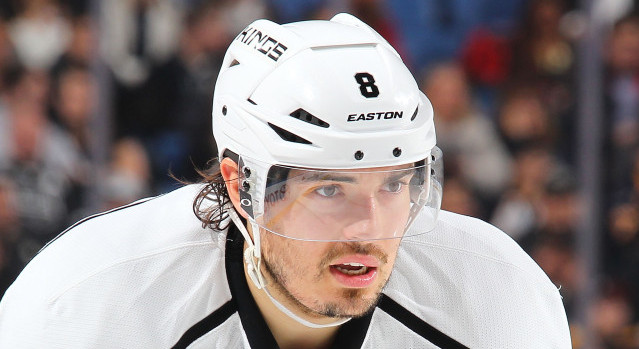 Though the general sense of the team was that it played well against Montreal on Friday night, dominating in scoring chances and shots on goal – and racking up a season-high 92 shot attempts – that Los Angeles was unable to claim two points didn’t sit well with Drew Doughty when he spoke with the media after Saturday’s practice.

“We weren’t happy with our effort [Friday] night,” the defenseman said. “Yeah, we could say we maybe should’ve won. Their goalie played well, but the bottom line is we still lost six-two, so that’s not a good game.”

The Kings’ 35 points represents the ninth-highest total in the Western Conference. Never mind that they have a higher points percentage than Calgary and Winnipeg, the two teams currently occupying the two wild card spots.

“We need to have a sense of urgency, that’s for sure,” Doughty said. “I can tell you that we’re not yet worried that we’re not going to turn it around and we’re not going to make the playoffs or anything like that. We know we still will do that. We just need to turn this thing around quickly, because we’re losing points and other teams are gaining ground on us. We need to win these games, especially when we come over to the east. That’s our opportunity to win games and kind of get up there in the standings.”

He clarified that wasn’t a knock against the Eastern Conference.

“No, I’m not saying that,” Doughty said. “But I definitely think the Western Conference is a lot more physical and a lot tougher in that sense to play in. It’s a grind. When we’re playing our division teams, they’re tough games and they’re games you’re coming out with 10 ice bags on you, and when you come out to the east, it’s kind of more run-and-gun and offensive game. So we need to play good defense, because if we play good defense and keep ‘em off the scoresheet, that’s how we’ll win.”

Drew Doughty, on whether the Eastern Canadian trip is coming at the right time:
Everyone loves coming over to Canada. It’s always fun playing in front of these fans. They’re always great fans, and a lot of us grew up here, especially close to Toronto, so playing against the Toronto Maple Leafs is special to all of us. We obviously all want to play well in front of the team you grew up watching, but at the same time it can get over your head and you try to do too much, so we need to find the happy medium there.

Doughty, on what has led to the lack of success on the road:
I don’t know. We’re usually a good road team. We haven’t been, obviously. I don’t have a reason for you. We just need to figure it out. We know how to play that type of game, that road mentality game. I think sometimes we’ve maybe done it well and we didn’t get the wins, and then there’s times we haven’t done well and we did get the wins. So the bottom line, we just need to get the wins. It doesn’t matter how it happens. We’d like to play the right way. We need the points playing the right way, too.

Doughty, on whether he has seen much of the Maple Leafs:
No, I haven’t seen the Leafs play once this year. We’ll watch some video on ‘em [Sunday] and prepare for them that way.

Doughty, on Jonathan Bernier:
I had a lot of fun with Bernie. I’ve known him for a long time. We played World Juniors together, we played Canada-Russia series together, so I’m good buddies with him, still. We’d hang out quite a bit when we were on the road and stuff when he was playing with us. It was sad to see him go – he’s a good teammate, good goalie – but he’s doing really well and he’s showing the world how he can actually play.

Doughty, on Jonathan Quick sitting on the opposite side of the ice from the team in Montreal:
It was probably not good, especially in Montreal, just because he probably was bothered the whole game I would assume, right?…I felt kind of bad for him by himself over there…It’s tough. That would suck. They want to be a part of the team, still. Not that they’re not, but they want to be on the bench with the guys, that’s for sure. It was kind of unfortunate, but what can they do?