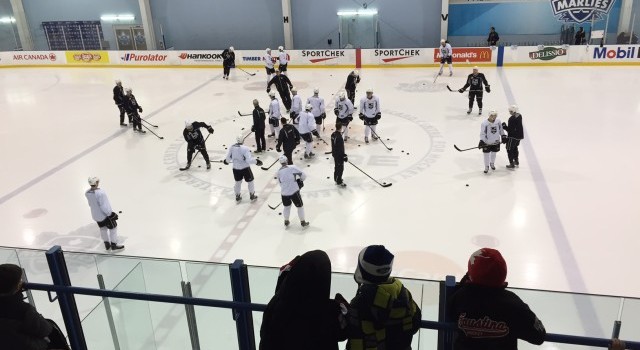 The MasterCard Centre for Hockey Excellence is a tremendous facility but somewhat of a pompous name, no? Is excellence expected out of all hockey programs that share the sprawling complex? If a rec league goalie allows five goals, did he or she not live up to the building’s mantra? Should they feel shame?

The Kings are wrapping up practice in suburban Toronto. There were changes to the forward lines:

All defensemen were on the ice and accounted for.

Because there’s no morning skate in advance of tomorrow’s 5:00 p.m. local start, the #LAKingsGoalieTweetOff applies. Jonathan Quick left the ice first and should be expected to start against the Maple Leafs. It is not yet clear whether he’ll face former teammate Jonathan Bernier or James Reimer; Reimer is dealing with a “tweaked” groin, which could cause a wrinkle in Toronto’s plans. Randy Carlyle told reporters yesterday that Reimer will get into one game this weekend. “All I’ll say is that one is going to play one and one is going to play the other one,” said Carlyle, as reported by the National Post. The Leafs face the Red Wings at the Air Canada Centre tonight in a rematch of Wednesday’s game in Detroit, won by Toronto in a shootout.