Richards: “I’m just focused on however I can help this team” 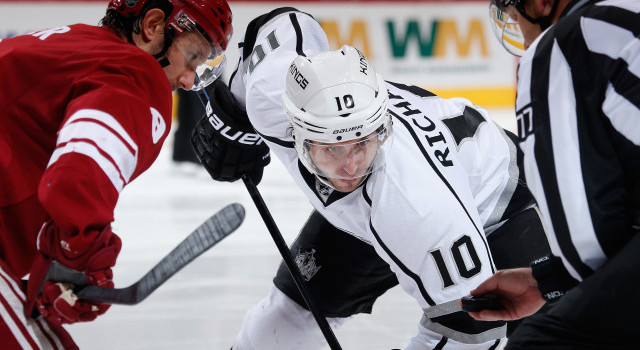 Though the Canadiens skated at their own facility, several Kings took the ice at the Bell Centre as part of a highly optional morning skate in which there weren’t nearly enough players to engage in any real kind of line rushes. There were meetings within the dressing room, and most players worked out, stretched, and took part in a highly competitive game of two-touch (explained here), a warm-up competition that involves kicking a soccer ball around a circle. For reasons I can’t explain, two-touch was known as “sewer ball” while I worked in junior hockey.

Several players were brought out of the team’s room to address the media in the event level of the Bell Centre, and one of those players, Mike Richards, was asked a fairly introspective question about how his role has evolved from when he was in Philadelphia to now having three seasons under his belt in Los Angeles, and whether he accepts that his role as a player may have changed.

“I mean you want to play every night as much as possible, but I’m still playing a lot of different situations,” he answered. “I think that’s what gives us the most success, is when we play four lines and we just roll them through no matter what the score of the game is, what time of the game it is. Just whoever is in the middle of the bench is up.”

“…I see myself as the same player. I may have gotten away from some things and I’ve watched some tape at what I can get better at and what I have done well in the past and am probably not doing so well right now. I think that’s just any hockey player that wants to improve their game in any situation, no matter how much they’re playing or what team they’re on. Right now, I’m just focused on however I can help this team. Whether that’s playing 15 to 20 minutes, or 10 to 15 minutes, it’s about however you can help the team win.”

Mike Richards, on the team’s poor record on the road:
We just haven’t had good starts. I think that puts us behind the eight-ball pretty quick. For whatever reason, on the road it’s been an uphill battle for the most part after the first period. It happened again last night, but tonight we just have to be ready.

Richards, on what he expects from Montreal:
They’re good, especially at home. They’re a quick team. They have a great goaltender, good D and quick, hardworking forwards. So we’re going to have our hands full.

Richards, on how he would describe the Kings’ winning formula:
It’s just enjoying being around each other. You can see it out here. It’s just a joy, I guess, coming the rink every day.

Richards, on whether the team is surprised at where they are in the standings:
We would like to be higher. I think we would expect to be better, but this is the position that we’re in. It’s what we’re going to do to try to push through it and hopefully climb the ladder a little bit. Even though it’s not about the end of the year right now, it’s about putting games together. We know how close the West is. It’s getting points every night, because it seems like every other team is doing the same.

Richards, on whether he followed Montreal’s playoff run last year:
It’s so tough. You watch games, but you don’t analyze different teams. I think you just watch playoff hockey as a fan and try to enjoy it.

Richards, on Jake Muzzin:
I think [he and Drew Doughty] complement each other really well. Muzz is a smart hockey player and seems to always be in the right position and makes a lot of great plays with the puck. I think them, Drew probably went through it a little bit earlier, but Muzz coming in a little bit later. It really helps Muzz out playing with Drew I think. He can throw a lot of things off of him. I think they’re similar players with the skill level they have. I think it’s good for him that he’s playing really well for us.