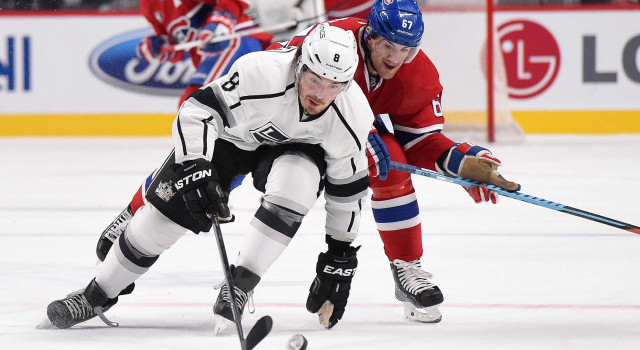 Drew Doughty, on whether Carey Price’s performance wore on them mentally:
No, I don’t think so. We know Carey Price is an unbelievable goalie, one of the best in the league. He wins games for his team all the time. We just want to continue to get pucks to the net. As you saw in the third period, we eventually started putting pucks behind him. We started getting on a roll. And like I said, we started to cheat a little bit and not play the right way and that backfired.

Jake Muzzin, on the loss:
I think we came out with a good push early and didn’t capitalize on chances and they got their opportunity to capitalize and kind of took advantage of it. We were left kind of wondering ‘What’s going on?’ We’ve got to look at some stuff and get hungry around the net and I think we can change the outcome of that game.

Muzzin, on whether this was a typical possession game for the team:
We had the puck a lot and we created a lot, but no goals at the end of it. You need goals to win obviously. They ended up capitalizing on their power play and taking momentum. I thought we battled back and stuck with it and continued to try and fight and get some more goals. It just wasn’t happening.

Muzzin, on Carey Price’s performance:
He’s a good goalie. He’s going to do that. All of us need to bear down and capitalize on our opportunities when we get them.

Muzzin, on whether this was one of their better games moving the puck:
Yeah, we had good movement. We also had a lot of power plays. That’s why the shots are probably so high. We had good movement, created a lot. At the end of the day, we still need those goals and it’s maybe a lucky bounce here to get some going. But we need to bear down.