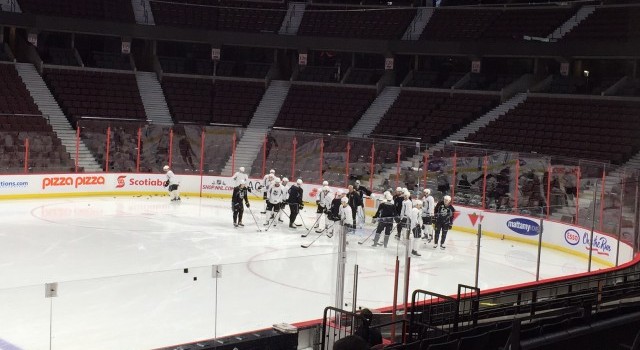 Good afternoon from the loading dock at the Canadian Tire Centre, where we’re enjoying the last few minutes of high speed internet before making the 30 minute trip back to central Ottawa.

The Kings didn’t hold actual line rushes at the morning skate, though groups of players skated up and down the ice in threes and fours to open practice. The groups indicated the same forward alignments that had skated together since Sunday will once again be used tonight:

Because Jordan Nolan remained on the ice for the extra work, it appears as though Kyle Clifford, who has recovered from the flu, will draw back into the lineup for the first time since Saturday. Should Clifford and Dwight King flank Mike Richards, expect Clifford to skate as a left wing and King to skate as a right wing.

Jonathan Quick left the ice first at the morning skate and should be expected to start against the Senators.

There was a really interesting story by Jeff Z. Klein of the New York Times last month about the Senators’ ongoing experiment with a hardcore supporters section, similar to the type of fandom you see in soccer. It’s very much worth the five minutes it’ll take to read it.

I’ll join Steve Lloyd on TSN 1200 at 1:35 p.m. to offer a Kings perspective of tonight’s game. Click here to launch an audio player and listen live.

Notes on the Senators, who will be playing their first game under Head Coach Dave Cameron:

Milan Michalek (upper body) will likely be out for at least two games (tonight and Sunday in Boston), but will go on next road trip #sens

No MacArthur at Sens skate. Flu

Cameron: MacArthur is a game time decision, but doubts he’ll play. Methot and Wiercioch are out. Methot “banged up a little bit”

While confirming Anderson will start against the Kings, Cameron said he'll generally try to make the announcement a day in advance #sens