Futa checks in with a Manchester update 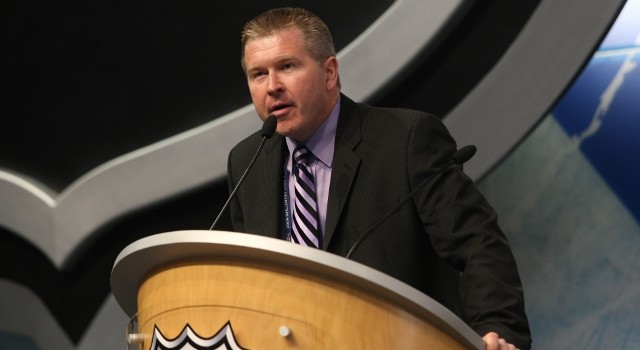 While General Manager Dean Lombardi is currently in Manchester to watch the Kings’ prospects firsthand, Vice President of Hockey Operations and Director of Player Personnel Michael Futa was recently embedded with the club’s top farm team and continues to keep close tabs on the development of young assets.

Having spoken with Futa off-hand about several Kings prospects over the weekend, I approached him at the Canadian Tire Centre this afternoon to continue the conversation of several interesting names, including former Coyotes enforcer Paul Bissonnette, who signed a PTO with the Monarchs earlier this week.

Michael Futa, on Nick Shore:
He’s been outstanding. He had a great camp when he was here. Obviously it was a big decision for him coming out with the expectations and [there is] a big difference for these kids between the college schedule a pro schedule. I think him coming out and being a part of that initial playoff run and then being able to put in the time that he’s put in, it’s really paying off. I think he’s playing a much more mature game. I know our coaches here really preach to him ‘200-foot game.’ It’s such a critical thing for a player like that. Your offense isn’t just going to naturally translate, and he’s gone down and put in his time and it’s been really good to see. He’s been so attention-to-detail away from the puck and positive, that his offense is coming natural for him now. He’s a little stronger. We basically told him that you’ve got to put yourself in a situation that if anything happens up here, injury related, that you’ve got to make it a tough decision. You’ve got to be really pushing, like Jordan Weal was a guy that was kind of the next in line. You’ve got to be pushing to be the first call up if something were to happen. He’s really put himself in a situation, along with Wealer (Jordan Weal) and Nic Dowd, it’s a pretty neat situation down the middle down there. They’re all different shapes and sizes of what they bring, but they have kind of internally had a really good, healthy competition down there and made that decision, if it ever has to come, a tough one.

Futa, on Derek Forbort’s professional growth:
The good thing about Forbs is because of, unfortunately the Slava situation, but with the defensive situation up here, he hasn’t needed to be rushed. Obviously with the McNabb trade, it has allowed us to bring up somebody that’s matured and played a little bit more pro hockey. It hasn’t forced his hand. He’s been able to get more comfortable, be a better leader, absorb big minutes, physically mature, physically develop, and I think now down there we’re starting to see – it might not be as high end as we initially thought, but it doesn’t matter – he’s looking like a guy who’s going to play. If you can get a guy who can play big minutes and defend well and skate as well as Forbs does, it’s really good.

Futa, on Justin Auger:
He plays a better pro game than he did a junior game. It was very frustrating watching him play in Guelph. He’s a big kid who sometimes looks like he wakes up in the morning and is angry that he’s actually six-foot-seven because I think growing he was asked to be a lot meaner than what’s naturally a tendency for him. But he’s gone down there and I think Mike Stothers and Hajter (Chris Hajt) have been really good for him. I think he’s actually done some really good things when he’s been at our training camps, and in his case, his numbers probably presented he’d be a guy who should go back and play an overage season. But he challenges himself better when he’s playing against men. The game I was at down there, he scored a goal. Our guys do such a good job of teaching puck protection with Nellie (Nelson Emerson) and Muzz (Glen Murray) and Mike Donnelly. He scored a goal – he went around Griffin Reinhart who is clearly going to be a star NHL defenseman. It was just like a textbook, ass out, protect the puck, in alone, use his reach, use his body to his advantage, use it as a tool, as a weapon. Not as a fighting weapon, but just make that puck yours. You’ve got to be very tough to play against. It was a Bobby Ryan-like goal as far as protecting, then he got the long reach out around the goaltender and finished it off. I think our texts were going on. I was there live and OC (Mike O’Connell) was texting me live and Nelly was texting me live. It was just one of those ones where you’re like…I mean this guy is not out of the woods yet. But you’re starting to see a little bit more of what we were projecting him to be.

Futa, on Colin Miller:
He’s doing well. He’s already a pro skater. I hate to use this [term], but he’s almost got like a dirtbag mentality the way he plays the game. He’s a very popular player with his teammates. What Millsie’s got to do is realize that if he can combine his natural talents in that not fearful, like Drew has that where he is going to try to make that high risk play because he does it and if he fails he can just bounce back from it. Millsie’s got to learn sometimes that the simple play isn’t a bad play. He forces some things at times. And he’s learned from it because when he simplifies things, and then gains his confidence, he can do things that so many other people can’t do. He was great the game I was down there. I think he hit everybody on Bridgeport with at least one slapshot. I said ‘they had to be limping onto the bus after the game because he’s got a howitzer.’ He was hitting everybody. So I think just patience and getting pucks through – and his attitude has been great. [Stothers] has been great for him and they’re thrilled with the way he’s playing down there.

Futa, on Paul Bissonnette signing a PTO with Manchester:
That’s the one thing that we should get clear is there is no lack of leadership down there. Their atmosphere down there is so bloody refreshing. It’s been great. Biz called me on Monday morning and he was released from his PTO. I had experience with him in junior hockey and know that he’s a guy that provides great leadership. And if Stuts (Mike Stothers) hadn’t coached him in junior, it probably isn’t something that we would have looked at with Andy on his way back and Gratts (Josh Gratton) is kind of providing the toughness and stuff down there. We felt that with Sabby (Scott Sabourin) being out four to six weeks here with his injury, that brining in another guy that’s – we’ve got a younger team down there – going to be a real good role model, that’s going to accept his role as a fourth line grinder who has played in the National Hockey League who’s going to be a real positive role model. Biz is a really fit guy. He’s a really fun guy in the dressing room and Stuts knows him. Stuts had a great conversation before we made the deal with him. That’s what he will provide. He’ll be twitter free. That was one thing [from] Dean, it was a GM demand. Tweet free, just go down and be a role model. Biz is a special kid. He’s excited about it and hopefully he can turn it into more than that.