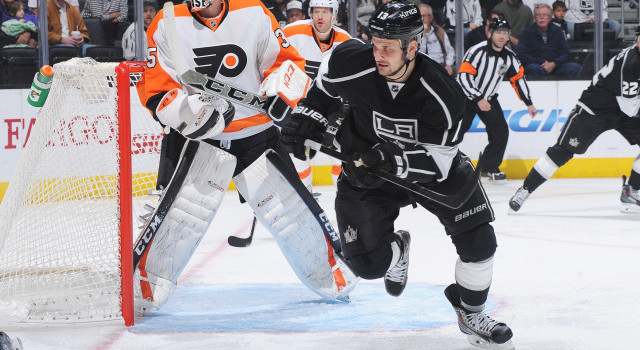 A day after missing his first game of the season, Kyle Clifford was once again on the ice with his Kings teammates one more day removed from a flu that began sneaking up on him during Saturday’s afternoon loss to the Flyers.

“When you’re in a game you’re not trying to think about outside things,” he said. “I was heating up, but just trying to focus as much as I could on the game.”

Of course, any athlete trying to battle side effects of the flu brings to mind Michael Jordan’s 44-minute effort against the Utah Jazz in Game 5 of the 1997 NBA Finals. Jordan dropped 38 points in the win.

The forward didn’t practice with the team the morning after the Philadelphia game, but by the time he arrived in Buffalo on Monday, he had improved considerably and took part in yesterday’s morning skate. He’s nearing full strength today.

“I feel good, getting appetite and energy. So it’s all good signs,” he said.

It’s not clear whether he’ll play against Ottawa tomorrow. During line rushes that opened up Wednesday’s practice, he was jersey color coded with a group of players that also included Dwight King, Mike Richards and Jordan Nolan and did not take the first rotation with the group.

Fortunately for Clifford, the illness was the flu – and nothing more. Because of the mumps scare around the National Hockey League this season, the club’s head athletic trainer had already taken the necessary precautions to keep the club’s dressing room clear of the viral infection.

“We had our shots,” Clifford said. “Chris Kingsley has been staying on top of that. I wasn’t too worried about that.”

Kyle Clifford, on his fever:
It was that Saturday at the game, it just spiked up. It was more precaution, maintenance, getting on top of it.

Clifford, on whether he went to the hospital:
No, I just stayed at home and my temperature went down in like 12 hours. It’s pretty good.