This is likely our last stay at the current team hotel in Buffalo as the Pegula family’s HarborCenter project adjacent to the First Niagara Center nears completion. A “mixed-use hockey and entertainment complex,” the first six floors of the of the facility are open. There are two NHL-sized rinks on the sixth floor – one houses the Canisius College hockey team, and one allows for public skating before every Sabres home game – as well as a Sabres-themed Tim Horton’s that in good detail honors the late Hall of Famer.

Speaking of Tim Horton’s, two Saskatonians were arrested yesterday “after a dispute over diced onions on a breakfast sandwich” led to one of the customers throwing a live snake through the drive through window and into the restaurant.

While we’re on the subject of breakfast, there’s an unmistakable smell of freshly baked cereal that wafts through downtown Buffalo due to the close proximity of a sprawling General Mills cereal and flour plant. It’s a very good smell. When I broadcast minor league baseball, a Mariners farm team based in Clinton, Iowa fed into our High-A club, and players who joined our team after promotions were overjoyed to escape a city where the smell was fouled by a corn processing plant and a Purina dog food plant (referenced in this excellent report). There are no such complaints of Buffalo, which smells like Saturday mornings.

After a lousy stretch of weather (Dallas-rain, Nashville-rain, St. Paul-snow, Los Angeles-rain, Glendale-rain and Los Angeles-comfortable!), we’re not complaining about our environment to start this trip. There’s no snow on the ground downtown, and today’s temperature should top out at 41 degrees before cooling off later in the day. We may see some light snow when we depart for Ottawa after the game.

There was a great approach into Western New York yesterday, though WordPress is keeping me from being able to embed it properly. Click here for the Instagram.

The Kings are scheduled to hit the ice at 11:30 a.m. local time, though we’ll be at the rink well before then to get some perspective from the Sabres’ room. There’s lots more to come on a busy Tuesday. As always, thank you for reading and starting your day with LAKI. 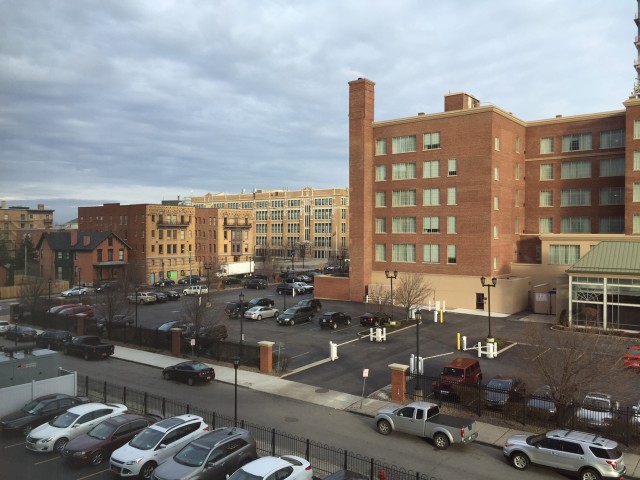