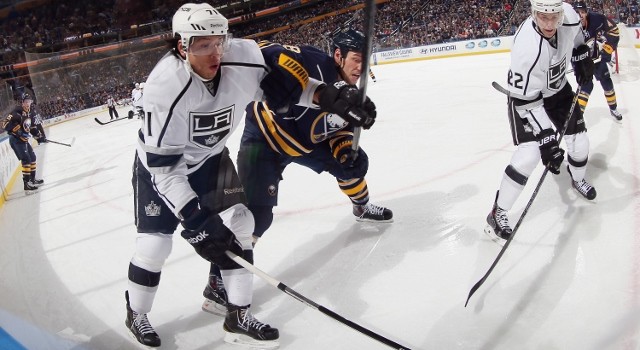 As noted last season, there are quite a few ties between the Kings and the Buffalo Sabres, a match-up that pits ex-teammates against each other (McBain, McNabb, Regehr, Deslauriers, Moulson), brothers-in-law against each other (Moulson, Quick) and a son (Nolan) against the team his father (also Nolan) coaches.

Because Sabres tickets aren’t as expensive as NHL tickets on the opposite side of the border, it’s not unusual to see a high contingent of Kings fans in attendance. Due to a combination of Wayne Gretzky, Los Angeles’ recent success and the fact that there are vast numbers of hockey fans across Canada, Ontario is home to a decent amount of fans who will cross the border wearing black, silver and white to tonight’s game.

There will also be particular attention to the Nolan family in the second installment of father-versus-son. Family and friends from St. Catharines and (slightly farther away) Garden River, Ontario have converged in Buffalo to support the family.

Well known for his rugged style of play, Jordan Nolan won’t back away from any of the bristlier aspects of the sport.

“He’s probably telling them to stay away from me right now, if anyone touches [me] they probably won’t play,” Jordan Nolan joked. “We’ll see how the game goes.”

Jordan Nolan, on his father, Ted, coaching Buffalo again:
It’s pretty crazy. We definitely didn’t expect this a few years ago, if you would have asked us if we thought he’d ever be back. When Patty (Pat LaFontaine) called and gave him the opportunity, he definitely jumped at it and the team is playing well right now. I think he’s very fortunate to be back here and he never gave up on his dream, so that’s pretty special.

Nolan, on whether his dad feels torn about coaching against his son:
He’s a dad first and he always wants to see me do well, but you’re trying to do a job here. You’re trying to win hockey games. They’ve been playing really well right now, so it should be a good hockey game.

Nolan, on meeting up with friends and family while in Buffalo:
It’s pretty nice to come back here. We have a lot of guests from the Toronto area. The family drove up from Garden River where we’re from. I saw my brother last night, so it’s definitely pretty special to have everyone here I think.

Nolan, on whether it is awkward to play against his dad’s team:
It’s kind of weird seeing him on the other bench. This time it shouldn’t be too bad. I’ll say hello again. We talked this morning. It’ll be a normal game.

Brayden McNabb, on whether he has been waiting for this game:
For sure, it’s definitely one that you pick out and you get pretty excited for. I’m excited. To be back here, it’s a little different, obviously, on the other side. I’m excited and we have to come out with a good game.

McNabb, on whether the morning skate felt surreal to him:
It was basically a year ago since I was here. A lot of things can change and I witnessed that. It’s definitely pretty cool being back.

McNabb, on how he has developed since the last time he played in Buffalo:
I think [I’m] just more experienced. I’m around a team that won a championship two out of three years. So you learn a lot from them and through the coaching staff. A lot of it is just continuing to get playing time and being able to play. 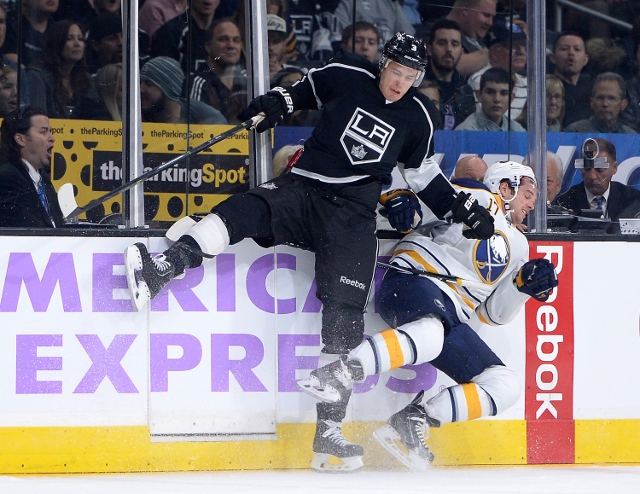