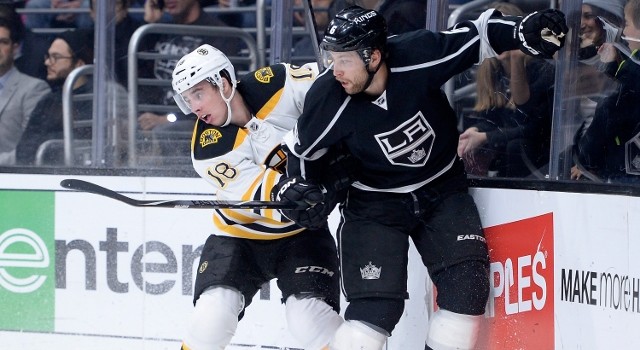 It’s not always easy being the Kings(s). As defending Stanley Cup champions, they’re accustomed to receiving the opposition’s best efforts regardless of whether they’re at home or on the road. It’s something that the team has picked up on – after learning it for the first time in the 2012-13 season – and has to respond to on game nights, as Jake Muzzin articulated.

It’s not an excuse, it’s the reality of the situation, and it’s an environment that any of the 30 NHL teams would love to be in.

Jake Muzzin, on responding to other teams’ top efforts:
We’re getting hit with everyone’s best, and we’ve kind of brought that on ourselves when you win and then you get hit with peoples’ best every night. They want to knock off the champs, and that’s what we’re getting. I think we’re getting better at preparing for that. Maybe a couple games early on in the season we didn’t really prepare for getting teams’ best, but I think we’re doing a better job at preparing for their A-games.

Muzzin, on Saturday’s game against Philadelphia:
I thought we put in a good effort. We didn’t give up much after they had their chance. They scored…two on the rush, but we had opportunities to score and we didn’t. We’ve got to bear down. I don’t want to give credit, but their goalie was good. He made some good saves.

Muzzin, on his collision with Tyler Toffoli at Sunday’s practice:
Yeah, I tried to cut his ankle off and I missed. [Reporter: I saw you scared for a second.] Yeah, I was because I felt my blade hit his skate and it almost hit him in the skin area there. I kind of felt a little flesh on my blade so I eased up a little bit, thank God I did. That’s what those cut-proof socks are for, I guess. That would suck. I wouldn’t want to do that to our… he’s our leading scorer, no? That wouldn’t be a good one.