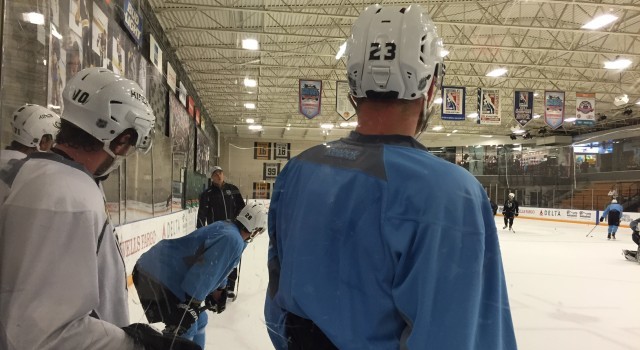 Good morning from Toyota Sports Center, where the Kings practiced for the final time before embarking on a five-city road trip that opens Tuesday in Buffalo. There were some developments of note at today’s skate. Among them:

-The forward lines have changed. That 70’s Line enthusiasts, rejoice:

So we kind of have a lot to talk about. First off, Kyle Clifford has the flu, per Darryl Sutter, and went home after yesterday’s game with a high temperature. Members of hockey operations did not express any strong concern over Clifford, with one member of the front office referencing today as a “maintenance” day.

Second, Marian Gaborik (upper-body) practiced at what appeared to be at or nearly at full speed. He took part in rushes and participated in drills that had a battle element, and when he did so, he skated opposite Justin Williams on Anze Kopitar’s line. He’s very close to returning.

“I talked to those guys in Manch to see how Andy [Andreoff is doing],” Sutter said. “He played last night and tonight, and if Gaborik isn’t ready, then we’d bring Andy back.”

Third, That 70’s Line was reunited – at least in practice. Whether they’ll be grouped together Tuesday night in Buffalo will be learned at that morning’s skate. The Kings aren’t scheduled to practice tomorrow before traveling east.

Forecast for Tuesday in Buffalo: High of 42, low of 30, mostly cloudy. Looks like we’re dodging a bullet on our way out.

One final practice before heading east