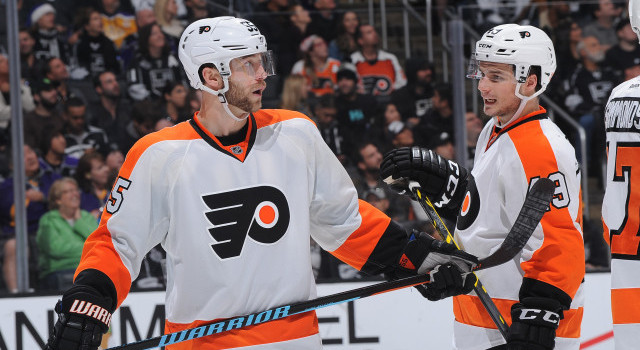 Craig Berube, on whether this was the type of game he wanted from his team:
I thought we battled hard. We blocked a lot of shots. I thought the first half, we played really good hockey. The second half, we were kind of on our heels. They got a couple power plays in the second period back-to-back, kind of set us back a little bit. In the third, they got that goal and we were kind of sitting back too much. Overall, the battle and the competitiveness was there defensively and we pulled a win out.

Berube, on the penalty kill:
They did a great job. I thought all of them – Reader, Umberger, Raffl, we had Laughton out there, Giroux with the faceoffs did a great job and won a lot of draw – got the puck down the ice. They did a real good job of not allowing the Kings to enter the zone with puck possession. They made them dump the puck, made them work to get the puck back, little things like that. That’s why we’ve been a good penalty kill unit over the last few years, is doing things like that.

Claude Giroux, on earning the season sweep against Los Angeles:
I think we’re more happy to actually get a win. We’ve been playing good the last few games and we knew that. The result just wasn’t there. Tonight we were able to get the results.

Giroux, on the victory:
We played as a team tonight, I think. Obviously that team is a really good team. Steve made a lot of good saves to keep us in the game. It’s kind of a relief to finally get two points.

Wayne Simmonds, on whether they “get up” to play against Los Angeles:
They’re the Stanley Cup champs. They’ve won two of the last three years. You’ve got to bring you’re A-game against these guys, obviously. They play a heavy game. They’ve got a lot of big players on their team and they all finish their checks. I thought we did a good job competing tonight.

Simmonds, on the win:
We seem to play better against better teams. I think over the last three games, we’ve been getting better and better gradually. Tonight I think we just played a harder and heavier game and we eliminated the mistakes we made at crucial points in the game.