Practice notes, and how Sutter decides on shootouts 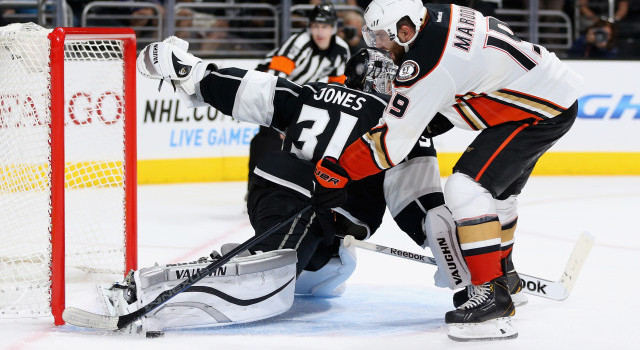 There wasn’t much surprise when the Kings practice Friday morning in El Segundo. There weren’t any changes to line combinations as indicated by color-coded jerseys, and Marian Gaborik cycled through as an extra, so it’s unlikely he’ll return to the lineup for tomorrow’s game against Philadelphia. Because the game is a matinee, it is worth noting that Jonathan Quick left the ice first at practice and appears set to start against the Flyers.

Once the puck movement drills concluded, the Kings practiced shootouts on Jonathan Quick and Martin Jones. The Kings are 1-3 in shootouts this year, with Quick stopping three-of-seven shots (and earning the lone win), and Jones stopping five-of-six. Marian Gaborik (one-of-two) and Jeff Carter (one-of-four) are the only shooters to score in shootouts this year, with Jarret Stoll, Anze Kopitar, Dwight King and Tyler Toffoli combining to go scoreless in eight attempts.

After practice, I spoke with Darryl Sutter and Martin Jones about their shootout philosophies and preferences. It’s a worthy hip pocket guide that will help you resist the urge to aggressively question why [Player X] was used in the shootout when clearly [Player Y] was the obvious option.

Darryl Sutter, on shootouts:
There are lots of different philosophies going into shootouts. I ask the coaches before the game, in particular Billy, once we know who the goalie is – not the shootout, but breakaways – [about] tendencies, things like that, or if…do righthanders score more on him? Do lefthanders score more on him? Things like that. And then from my standpoint, you’re looking at past performance, the game itself, you try and see that sometimes, and go from there. Shootouts are a crapshoot. [Reporter: Has Drew continued to lobby you to get included?] Drew’s history – I don’t know if I’ve seen him in one since I’ve been here, but I think his numbers were that he hadn’t had much success in shootouts.

In his young career, Jones has stopped 17 of the 18 shots he’s faced in shootouts. While shootout practice allows the shooters to develop and incorporate new moves into their repertoire, it also allows the goaltenders to gain repetitions that can help them in games.

Martin Jones, on his high save percentage in shootouts:
I think for me, going into it, my mindset is just and be patient. Everybody is so good. There are so many skill guys and skilled shooters that you just have to make sure you stay patient and try not to bite on the first move all the time. Just try and get a good read on it.

Jones, on which King is the toughest to read in a shootout:
You could go through pretty much the whole lineup and there are a lot of guys that can score. Obviously the big guys like Kopi and Gabby and guys like that. There are a lot of skilled shooters, for sure.

Jones, on facing Marian Gaborik in a shootout:
I think the biggest thing with Gabby is his release of the shot. It’s pretty deceptive and tough for goalies to pick up. He uses it pretty well, for sure.