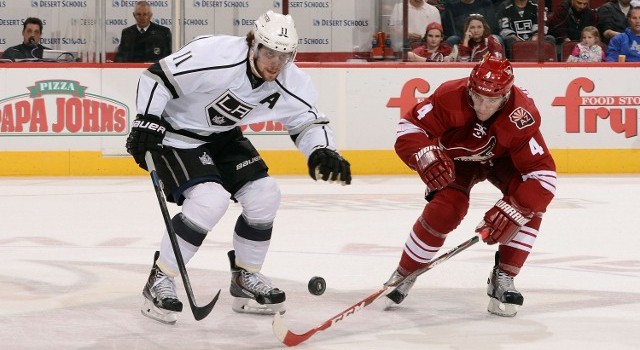 On the goaltenders’ performance as of late:
I don’t think a goalie wins you games. I think it takes everybody. I think he was sharp when he had to be tonight. [Reporter: It’s a team-wide thing, more than anything else?] Yep. Yep.

On blunting Arizona’s momentum when they began generating chances:
They were coming back from back-to-back games in Alberta, and I’m sure if you went over and talked to them, they were going to say they were flat and we didn’t give ‘em much. We had, I think, in the first period, three or four odd-man rushes, one being Brownie’s breakaway, and we had two or three two-on-ones and we were able to cash in on one of ‘em. That got us out of the period.

On winning a building they hadn’t won many games in recently:
We’ve played pretty good here of late. We’ve only played here once this year until tonight. [Reporter: I just meant I think it had been five in a row since you had won here. But you played well.] You know what? I don’t even get into it. If you’re just talking about it this year, that’s all I base it on. What is last year, the year before? It really has no bearing on anything. Teams change and the way teams play changes. It really has no bearing. If you’re only looking at records or numbers and buildings or against an opponent, you might never win again, or you might never lose again, if it’s just based on that. It’s not based on that.

On beating Mike Smith, who had performed well against the Kings in his career:
You’ve got to put everything into it. It’s not just regular season. It’s so much more involved in today’s game than that head-to-head stuff.

On how closely the Kings are playing to his standards:
You know what? I’ll base it on tonight, and we played well. So go home, play Philly and hopefully play well again.