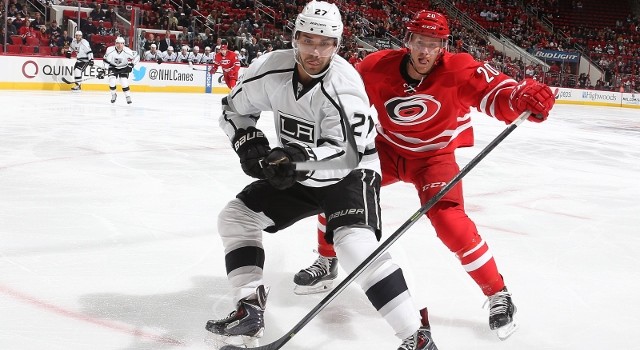 As first reported by Elliotte Friedman of Sportsnet, Alec Martinez has signed a six-year, $24 million extension with the Los Angeles Kings. Martinez, who signed a two-year, $2.2 million dollar contract during the summer of 2013, was bound for unrestricted free agency on July 1.

Martinez, who received significant term that will keep him under contract through the 2020-21 season, would have made more money had he hit the open market, given the expected dearth of available prime-aged defensemen come July 1.

The Kings now have $60.2 million allotted to 14 players for next season, according to CapGeek.com, and will need to negotiate new contracts with a pool of restricted free agents to be in Tanner Pearson, Tyler Toffoli, Kyle Clifford, Jordan Nolan, Andy Andreoff, Martin Jones and Nick Shore, amongst others currently in Manchester. Players bound for unrestricted free agency include Jarret Stoll, Justin Williams and Robyn Regehr.

The priority on getting Martinez re-signed was high. Because Drew Doughty, Jake Muzzin, Slava Voynov, Brayden McNabb, Matt Greene and Jeff Schultz are signed through next season – a group that includes a waiver-eligble player in Manchester and another suspended indefinitely by the NHL – and Derek Forbort developing but not at the moment able to make a leap to a regular NHL role, locking up Martinez long term was a necessity.

Martinez’s usage has jumped up by nearly four full minutes per game this season. Having recorded a career-high 11 goals and 22 points over an average of 15:41 ice time per game in 2013-14, Martinez has inherited a wider responsibility given Willie Mitchell’s departure and Voynov’s suspension, and will enter Thursday’s game at Arizona averaging 19:40 per game.

While his shooting percentage predictably dropped from an anomalously high 13.9% last season to 4.7% this season, he’s still on pace for 8.3 goals. Considering he hasn’t yet scored on the power play and should see a production uptick on the man advantage, it wouldn’t be a major surprise to see him near a double-digit goal tally.

His underlying numbers, however, represent a drop in possession. His Corsi-for percentage is in the red for the first time in his career, a curious development after the adept puck-mover maintained a Corsi rate of at least 55% in each of his first four seasons in the league.

The left-shooting defenseman has been playing on his off-side – as he did for much of last season – alongside Robyn Regehr and has been praised for his versatility by Darryl Sutter. He returned to the lineup last night and contributed 19:01 of ice time following a seven-game absence due to an injury to a little finger that required surgery.

The 27-year-old was selected in the fourth round in the 2007 NHL Draft and has totaled 62 points (25-37=62) over 221 career games. He played in all playoff games during the team’s 2012 and 2014 Stanley Cup runs and memorably scored the Cup-clinching double overtime goal on Henrik Lundqvist in Game 5 of the 2014 series against the New York Rangers.