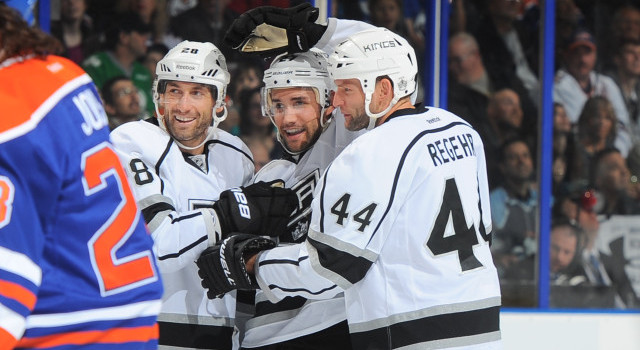 Before the team left for Arizona earlier today, reporters spoke to Alec Martinez about his return from a little finger injury that required surgery. As it turned out, it was the second most important Martinez topic of the day.

But in addition to Martinez’s comments on his return, I also asked him about the impact Robyn Regehr – his defensive partner and the team’s elder statesman – has on the room and a relatively young blue line.

“I think that Reg, he’s obviously been around for a while, and I think he’s good at recognizing when things need to be a little bit more serious, when we need a kick in the rear, and then he’s really cognizant of when it’s OK to play a practical joke or just crack a regular joke to get the guys laughing, get the guys in a good mood,” Martinez said. “He’s been around for a long time. He can recognize those situations. That kind of guy, they’re a very, very valuable asset in the room. You need people like that.”

It was a similar evaluation to the one provided by Darryl Sutter.

“I think Robyn has always had an ability to have a really good handle on the room. Either in pressure or light or heavy, whatever it is, he’s always had a good handle on it, and as he’s gotten older and farther into his career, guys like that who’ve been there and done it all are basically an extension of the coaching staff, and they’re really a part of the glue and the fabric of the team.”

“…I mean, so much in today’s game is measured by the fan and the media of what they see on the ice, but so much of it is in the locker room on good teams.”

The left-shooting Martinez skated to the right of left-shooting Willie Mitchell for the plurality of his shifts last season and once again is skating on his off-side in 2014-15.

The Regehr-Martinez pairing was praised by Sutter after last night’s game.

“We talk constantly both on and off the ice about kind of what our strengths are and how we can work with each other to be successful. I think it comes down to making quick decisions in our own end and getting the puck in the forwards’ hands. We have different talents, but I think that we complement each other well.”

Similar to an on-ice Ontario Hockey League incident that never derailed the friendship between Tyler Toffoli and Tanner Pearson, origins of the Martinez-Regehr camaraderie began ominously.

“It was like my second game in the league and he suckered me right in the jaw,” Martinez said. “It was in Calgary. I was just some young kid and I had to punch him back. I was like ‘Holy crap, that’s Robyn Regehr. Did I just really punch him?’ I know what that’s like. We have a constant dialogue as partners or as D-corps with John or Darryl. We’re always talking.”

Alec Martinez, on what he focuses on coming back from injury:
First off, I think preparation. For me individually, I just want to make quick decisions and get my feet going. I think that’s probably my biggest asset, my feet. If I’m moving my feet, I’m more likely to be making plays than when I’m not. For me, I think it’s just quick decisions and getting my feet going and I want it especially in my own end. I want to take care of my own end first.

Martinez, on whether playing in the defensive end is difficult when returning:
Yeah, I think so because you have to make plays under pressure. It’s essentially what D-men do. You’ve got to go back and get the puck when a guy is barreling down on you. So I think just getting back into it that way and being clean and quick in your decision making and play making in your own end is the thing that I’d focus on.

Martinez, on whether opponents try to take advantage of a player’s injury:
I don’t really know. I guess you know when going into a game that a guy hasn’t played in a while. But I don’t’ think that if you know a guy has a bad wrist or something that you’re going out there trying to hack his wrist. I guess maybe some guys do that. I don’t really have an answer for you.