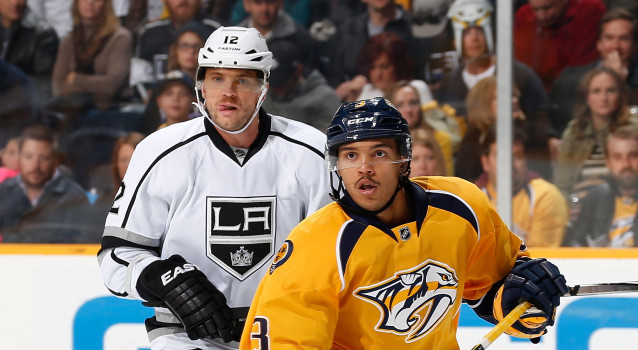 Good afternoon from Interstate 10, where there’s heavy traffic heading west from the Phoenix airport towards Glendale.

Darryl Sutter informed reporters that Marian Gaborik was unlikely to travel to Arizona with the team for tomorrow’s game against the Coyotes. “Didn’t practice full today,” Sutter said. “He practiced but not where he’s pushing through it.”

Gaborik is improving in his attempt to return from an upper-body injury suffered late in the third period during last Tuesday’s game against Nashville. Gaborik played the following night in Minnesota but did not participate in the Kings’ two-game homestand against Chicago and Boston.

The injury – the third to cause the skilled forward to miss time since the start of training camp – is similar to the upper-body injury that caused him to miss eight games in October.

Marian Gaborik, on whether he is frustrated by the injury:
Yeah, it’s frustrating. I just try to stay positive and get this resolved to the point where I can play and then just focus to keep going.

Gaborik, on when he suffered his injury:
It was in Nashville. [Reporter: You tried to push for it for a little bit.] It was late in the game at the end of the third period. Then I tried to play and just couldn’t.