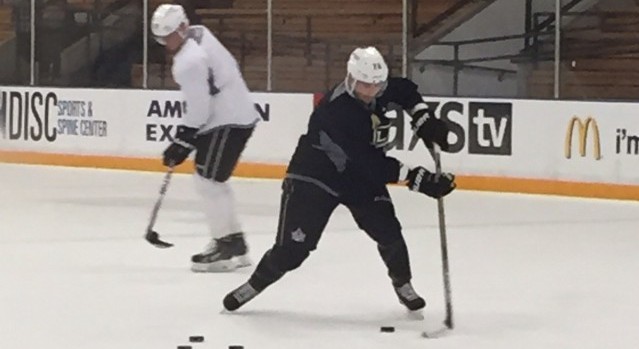 There was a surprise participant at the Kings morning skate today as Slava Voynov joined the full team on the ice for the first time since he was arrested on suspicion of domestic violence the morning of October 20. He has since been charged with a felony count of corporal injury to a spouse with great bodily injury and pleaded not guilty during a preliminary hearing yesterday.

His participation in a Kings practice is contrary to the terms of his indefinite suspension applied by the league, which allowed him to skate after practice – usually with Associate Coach John Stevens – but kept him suspended for all team activities. It’s explained as part of an email NHL Deputy Commissioner sent to the Orange County Register last month.

Dean Lombardi declined to speak about Voynov’s participation at today’s skate when approached by reporters in the team’s El Segundo practice facility, while another member of the team’s hockey operations tied his participation to the thought that the skate may have been “optional.”

That coincides with Darryl Sutter’s interpretation of Voynov’s participation.

“It was an optional skate and everybody went,” Sutter said. “He’s supposed to come out after with the injured guys, right after practice. Everybody went today…”

“It was an optional skate, and normally he goes out with injured players after practice or by himself after practice. Today he was out there early.”

All players on the team’s roster participated in the morning skate in advance of Tuesday’s game against the Boston Bruins.

Sutter declined to answer whether the team had coordinated Voynov’s participation with the league.

From the accounts I’ve been able to put together, Voynov took the ice early and remained on with injured players before joining fully in what was deemed by the team as an “optional” skate, though all players on the roster were present. The Kings and the NHL have been in contact in regards to this morning’s developments.