Martinez returns to the lineup, plays over 19 minutes 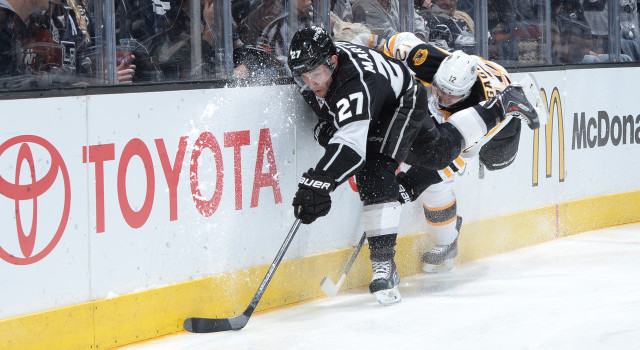 Alec Martinez returned to the Kings’ lineup after a seven-game absence and contributed an important 19:01 of ice time towards the team’s cause in the 2-0 win over the Bruins.

“It felt good to be back playing again, obviously,” Martinez said. “It’s not too much fun being out, but as for my game, I’m not too happy with it, I had to shake off a little bit of rust there, but I know I’ll get better next game. But, ultimately at the end of the day, we got the two points, and that’s all I care about.”

The left-shooting defenseman was once again placed on his off-side alongside Robyn Regehr and was praised for his work, which included three shot attempts (two on goal) and one blocked shot.

“When those guys, when they come back from injury, guys always have a lot of energy. I thought the pair was really good, Robyn and Marty,” Darryl Sutter said.

“He was cleared yesterday, but I wanted to make sure still with the contact part of it. It’s still the execution part. The skill set of skating, shooting, passing for our whole team has to be there, and I think Marty was good at that tonight.”

The Kings were 4-2-1 during Martinez’s absence. The 27-year-old underwent surgery on his little finger after suffering an injury while blocking a shot in a home game against Dallas on November 13.

Alec Martinez, on how his little finger felt during the game:
It feels good, I’ve been battling and doing stuff in practice, and obviously games are a little bit different. I hit it a couple of times, and sometimes you need that just to know its ok. But no, I felt good.

Martinez, on the Kings’ performance:
They’re constructed much like we are; they play some of the similar systems, we have a similar forecheck. We knew it was going to be a tight game and it was going to be a really strong defensive game. We both have strong goaltending, and like I said, we’re structurally built similarly, so I was pretty happy with how we played, I think we can tighten things up a little bit but we’ll go over that and get ready for Phoenix.