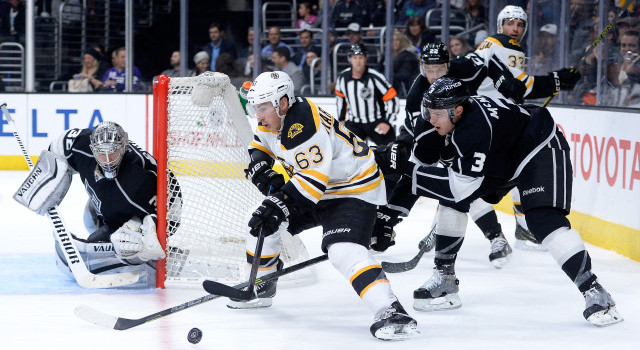 Anze Kopitar, on what he liked about the team’s performance:
I thought our start was better than the last game and we were able to get the first goal, which hasn’t really happened all that often. It was nice for a change playing with the lead instead of chasing it.

Kopitar, on his line’s performance:
I thought we had some good offensive zone time. The one thing I think we can still clean up is maybe coming out of our zone and some play in the neutral zone, but I think we’re on the right path, so we’ve got to keep working at it.

Kopitar, on what the team did well to get off to a good start:
Just being ready right off the get-go. We were shooting pucks. Obviously that five-on-three helped out to get a feel for the puck a lot better and create some chances. We hit a couple posts in the first, too. Again, all in all it was a good start. Everybody was ready right off the get-go and we were pressing.

Kopitar, on whether he heard Tanner Pearson calling for the puck:
I saw him. As soon as I picked up the puck, I looked up and I saw there was a lot of traffic in front of the net, and I saw Tanner off to the side and figured that was the best way.

Jonathan Quick, on the save he made on Torey Krug:
There was a scrum to my left and I could have swore I heard a whistle. The puck kind of squirted out, I thought I heard a whistle, so I really didn’t move at first…Then he looked like he was winding up with some purpose. I felt like I had to get over there and the puck just kind of hit me.”

Quick, on whether he realized Krug’s shot hit the post after the initial save:
Nope, no.

Quick, on the team’s performance:
It’s a win, so you’re always happy no matter how you play. No matter how well you play, you always feel there are things you can improve on. We got the two points against a great team, so we’re going to continue to try and get better, and we’ve got a big one against Phoenix in a couple of days here