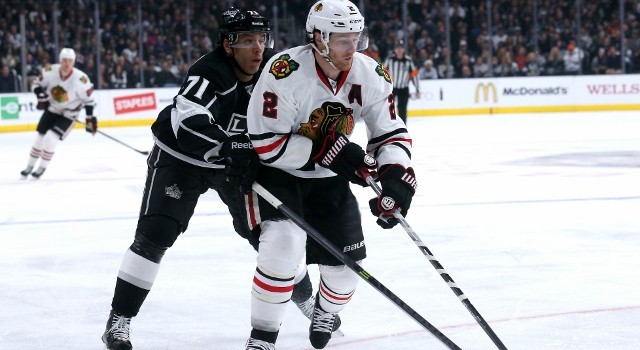 Lost in the end of the Blackhawks’ 4-1 win over the Kings on Saturday night was that Jordan Nolan received a game misconduct for actions that followed the Brayden McNabb-Daniel Carcillo scrap, shown here:

That misconduct has been rescinded by the league, according to Kings hockey operations.

Darryl Sutter expected that the misconduct would be taken away when he spoke with the media this morning.

Darryl Sutter, on whether he saw Daniel Carcillo’s wave:
After his fight with Brayden? Oh, he always does that after something…That’s no big deal. I was more concerned with the fact – not concerned – that they made the wrong call on Jordan Nolan. He got a game misconduct for spitting on the ice? What was it for? So that’s pretty obvious that that has to be rescinded. I wasn’t concerned about [Carcillo].

From my interpretation of Sutter’s recollection – I didn’t see the incident from the press box – Nolan spat on the ice and the officials felt that it was a demonstrative action. It wasn’t, so the discipline was taken away.

Nolan, playing in his first game since November 15, scored the lone Kings goal in the loss.

NHL Rule 23.2 – Game Misconduct Penalties – Fines and Suspensions
Any request by a Club to have a game misconduct reviewed and rescinded by the League must submit their request in writing to the League’s Hockey Operations Department within 48 hours of the conclusion of the game in which the game misconduct was assessed. Failure to submit the written request within this time frame will automatically result in the game misconduct being upheld and no further review of the incident will be considered or entertained. This does not apply to infractions addressed under Rule 29 – Supplementary Discipline.