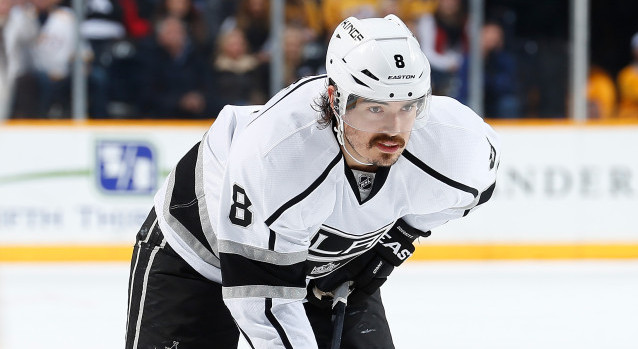 Today is December 1, so naturally there was an overwhelming reduction in the amount of facial hair around the Kings’ dressing room.

“Some things you’re disappointed to see go,” Alec Martinez said. “That wasn’t one of them.”

Though the team in the past has supported the players’ efforts to grow moustaches and facial hair as part of the Movember push to raise awareness for men’s health issues, this season it was up to the players to determine how they chose to promote their follicular adventures. Most did so privately, without any organized efforts undertaken by the organization.

“It was getting a little long,” said a freshly shorn Drew Doughty. “I actually look scarier this way than with my mustache. I’m not going to probably shave again.”

“All these other guys groomed their mustache. I just let it go. I didn’t touch it or [anything]. I think I had the best one because I didn’t try to look good with it. I just tried to let it go.”

December 1 – or, for those fortunate enough to advance deep into the playoffs, mid-June – is a time when it wouldn’t be surprising to learn of a blocked up sink at an NHL facility.

“That’s probably good for some of them young blonde guys to shave their moustache,” Darryl Sutter said.

Anze Kopitar, on whether he’s keeping his facial hair:
I have kept it. I honestly don’t remember the last time I was clean shaven…Actually it was this year. I was clean shaven in Dallas. But before that it must have been about three years, probably since my wedding day.

Alec Martinez, on who had the best moustache:
I like Cartsy’s. It was just long and straight and just dirty. It was the stereotypical, I think, 70’s [adult actor] stache. I just wish he ‘Just For Men-ed’ it so it stood out a little bit more.