The View from Chicago 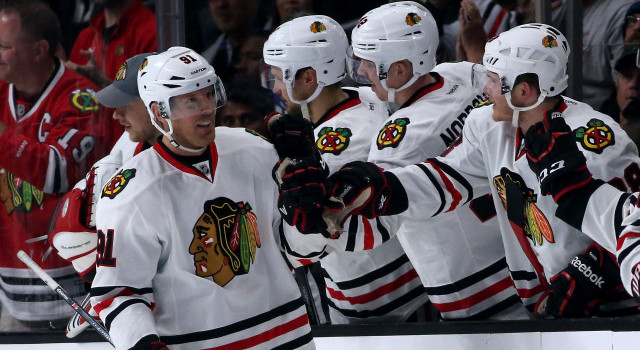 “The Hawks wrapped up their annual circus trip with another top-notch effort during a 4-1 victory over the Kings on Saturday night at Staples Center.”

“Well, Saturday night’s 4-1 victory over the Kings didn’t change the past, didn’t retroactively put the Hawks in last spring’s Stanley Cup Final. But it was a big win, and an impressive one, all the same.”

“The Hawks went 5-1 on the circus trip, handily beating the conference-leading Ducks and the champion Kings in a 32-hour span over the weekend to cap it off.”

“They made the most of scoring opportunities. Their penalty kill was strong. They shut down the Kings in the third period, allowing them just four shots on Crawford.”

“Whether we call them Kreeger, KRS-One, The Conjuring, or whatever else, this Versteeg-Richards-Kane line has been… cartoonish. Once again they were all above 60% in Corsi-percentage with the score close, and they had shifts where it looked like the high schoolers in the playground playing with the grade schoolers”

“We had not really seen a single group of forwards build rhythm this season due to the ongoing changes to the lines, but with this one, it appears the team has found some reliable offensive production.”