Toffoli an effective weapon against Blackhawks 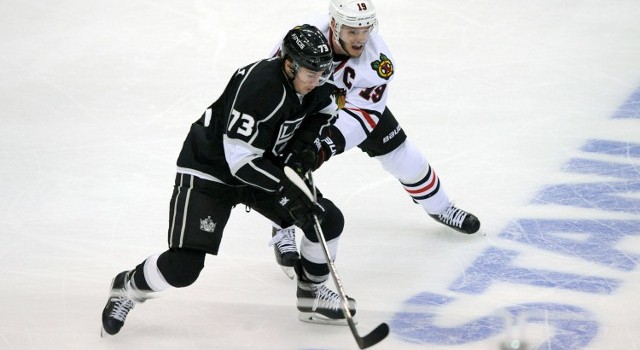 A reminder: Tyler Toffoli has been among the most effective players against the Chicago Blackhawks, having recorded points in 10 of 15 career regular season and playoff games between the two Western Conference powers.

Toffoli played down his offensive success against the Blackhawks and credited “a couple bounces here and there.” Certainly he would be right about the very first goal he ever scored against Chicago, but don’t overlook the power of getting pucks through towards the net.

“It’s just a lot of fun playing against them. They’re one of the better teams,” he said. “Obviously last year, they were the defending Stanley Cup champions. You want to play your best against the best. A couple bounces here and there, but I think now we have to focus on tonight and be ready to play. They had a really good game last night and beat Anaheim. They’re going to be coming in here and try to make a statement and get back at us.”

The Kings’ leading scorer with 19 points (9-10=19) in 23 games, Toffoli says he does notice teams playing him differently this season — though that’s partly due to the players he skates with.

“I think I notice it playing with guys like Jeff Carter and Kopi and Gabby. I think teams are more worried about them, to be honest,” he said. “I’m just trying to play my best and establish myself as an NHL player. So far, it’s been going well this year. But I just have to keep staying focused and keep working hard and playing the right way, helping the team in whatever way is needed.”

Toffoli, on whether there is added intensity when playing against Chicago:
I think you have to be focused to play against them. They’re a really, really, really good team. Really fast, skilled and if you’re not prepared then they’ll make you look silly and you won’t win the game. That’s what we need to do, we need to win tonight.

Toffoli, on his reflections of the playoff series against Chicago:
It was a lot of fun. I think for everybody, it was one of the best series that we could have played as a team. For the fans and everybody watching, it was a lot of fun for them too. It was good, but we have to move on from there and focus on tonight.

Toffoli, on what the team took away from the game in Minnesota:
We came out hard right from the start and just played the right way. It was good to get that. On the road, we’ve been struggling, obviously. It’s good to get back at it and finish that road trip and coming home to play against Chicago tonight and Boston.