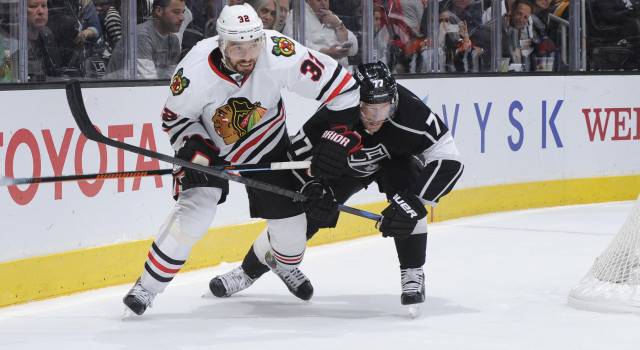 Brad Richards, on finishing their road trip with a 5-1 record:
That’s huge. Halfway through the trip we were right around a playoff spot, on the bubble. We talked about gaining ground, gaining momentum going into the second 20 games. We did a great job of that, coming together for test, really all good teams as we went through it. We won five out of six, which is huge.

Corey Crawford, on whether he is fatigued after playing his 14th consecutive game:
No, I felt pretty good the whole way through. There are times during games where maybe you get a little bit tired, but I don’t think it’s a factor at all.

Crawford, on getting wins against Anaheim and Los Angeles on back-to-back nights:
It’s pretty big. The second half of the trip it started in Colorado to get a big win there in a tight game. And then against two top teams in the west, we probably had our two best games of the trip. It was great. It was a great job by everyone. We’re all on the same page and we’re all battling together. It’s a good road trip for us.

Kris Versteeg, on Brad Richards’ goals:
Richie is the guy who is generally setting up, so it was nice to see him score a couple and have a couple other good looks too tonight and yesterday afternoon in Anaheim. When Richie is shooting and making plays, he’s a heck of a player.

Joel Quenneville, on whether they feel like one of the top teams in the league:
We got off to an ordinary start. We could see the team trending in the right direction. This is a sign that ‘Hey, we’re coming and when we play the right way, we’re a dangerous team.’ We’ve got a lot of different looks and Richie’s line spearheaded our offense in a lot of games this trip and that was nice to see that line come together.

Quenneville, on whether the team viewed this as an important game:
This was a good test for us, a good measuring stick. We had a good trip, let’s see how we finish it. We did a lot of good things. We didn’t get satisfied. We know we have to play the right way in this building… Great beginning and good energy throughout, kind of the way we were most nights through this trip.