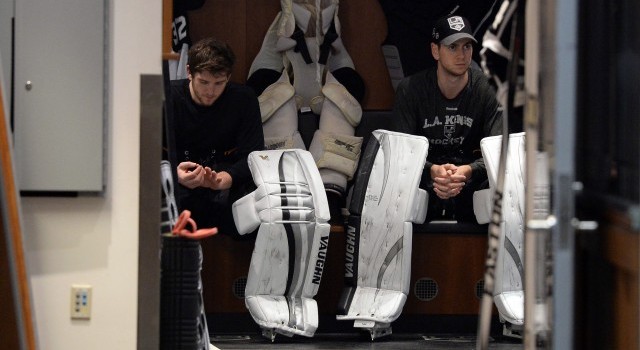 Those who assumed Jonathan Quick would start the second game of a back-to-back set after Martin Jones played the first night (guilty!) were taught a short lesson in assuming.

Darryl Sutter explained the decision-making process after Wednesday’s win, saying that he wanted A) Jones to get back to back road starts B) Jones to get a road win and C) Quick to get a near full-week off after heavy early season usage.

Quick said that he learned that he’d have an extra night off after the Nashville game.

“You always want to play, but I thought it was good for the team. Joner played well,” he said. “It was good for him, he played well. We got three out of the four points in two pretty tough buildings, so that was important. At the end of the day, you get ready for the next game. When you get your name called, you get ready for that game. Be prepared to try and win a game.”

Jonathan Quick, on his early-to-mid-season rhythm:
We’ve been lucky we’ve been at home a lot. Compared to the rest of the league, we probably played the least amount of road games. That’s always good as far as the wear and tear on your body – sleep in your own bed and not having to travel as much – but it also means that we’re going to have a good amount of travel coming up. I think Darryl’s trying to do what he can to keep everybody in rhythm and rested as well as possible, so I think he’s doing a good job of that.