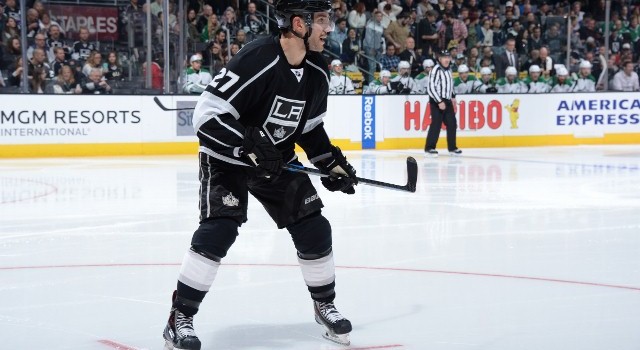 Alec Martinez has been receiving some pointed questioning from reporters trying to pinpoint the exact date of his impending return from surgery on his little finger that occurred two weeks ago. Martinez, who suffered the injury while blocking a shot during a home loss to Dallas on November 13, used an adage passed along from an earlier generation of Los Angeles Kings in his response.

“A wise man once told me ‘Just say you’ll be back by the weekend,’ but you just don’t know which weekend. That man was Bernie Nicholls, so that’s my answer for you,” Martinez said.

“Hopefully [I’ll return] soon, but I’ve just got to let the human body do its thing, let it heal.”

Martinez was an active participant in practice and appeared to be getting close to game speed. At practice, the Kings worked on transition drills and zone exits in groups of two forwards and two defensemen.

“He’s starting to shoot,” Darryl Sutter said. “That’s the next part, is being able to shoot it with some power.”

“You know what? We don’t play again until Tuesday, so he’s almost got to be a hundred percent, and I don’t know how to say it clearly, but I’m not going to play him until he’s [healthy]. You break the wound, and then you’re waiting for it to heal again.”

Martinez may not yet be back at 100%, though his recovery is in the advanced stages after having skated with a red jersey during a practice on the recent road trip and participating heavily at Wednesday’s morning skate in St. Paul.

“Just getting back on the ice with the team is nice. Skating by yourself sucks,” Martinez said. “You’ve got, obviously, limited options when there’s just one of you out there. Obviously a coach can curl through as a low center or something like that to work on it. But to be able to get back on the ice with the team and just be around the guys – up-tempo with a lot of energy going – it’s obviously different and a lot more fun. I like my friends. It’s fun to play ice hockey with them.”

Alec Martinez, on participating fully in practice:
I feel good. Getting better every day. That’s all you can really ask for.

Martinez, on whether he’d play on Saturday, if needed:
I guess we’ll find out.