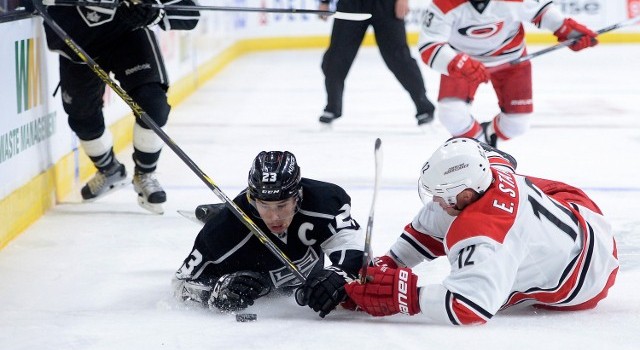 Last season, it was Trevor Lewis who was pinpointed for his ability to draw penalties without taking many. This season, it’s… Dustin Brown?

“Gentle player,” Brown joked to his teammates sitting nearby.

Brown, who has been assessed two minor penalties (!) while drawing 11, is tied for second in the NHL in penalty differential plus/minus. Toronto’s Nazem Kadri leads the list with a plus-11 differential, while Brown slots alongside the Islanders’ Kyle Okposo and Tampa Bay’s Tyler Johnson with a plus-nine.

Penalty plus-minus, as previously noted, is an underrated league stat that, if high on the plus-side, leads directly to quality offensive opportunities (via power plays).

“I think it’s more that you don’t want to obviously take more penalties, but I’m sure it’ll go up over the year, the way I play,” Brown said. “Eventually I’ll get penalties. I think it’s more a coincidence than anything else.”

Brown’s ability to draw penalties is well documented. From his 2013-14 evaluation:
Brown is in rare company when it comes to drawing penalties. He tied for the seventh most penalties drawn amongst all players – and would have drawn more, had his ice time not been cut – after finishing third, first, and third in the league in penalties drawn over the previous three seasons.

But it’s his ability to avoid punishment that has been the most impressive characteristic of his play, which, with four goals and seven points in 23 games, doesn’t leap off the page from a pure production standpoint.

“We talk to the team about [limiting penalties] before the season. Obviously Brownie took note of it,” Darryl Sutter said. “It’s not ‘penalty minutes,’ it’s ‘interference and stick penalties.’”

The Kings, as a whole, could stand to take fewer minor penalties. After ranking 27th in the league in minor penalties taken last season, they rank 27th in 2014-15. The team was shorthanded twice in Wednesday’s win in Minnesota, marking only the third time in a 14-game stretch in which they ceded their opponents fewer than four power plays.

Brown called noted the need to cut down on penalties has been a “point of emphasis.”

“I think last year we were one of the top penalized teams. Everyone talks about ‘starts of games,’ or ‘first periods,’ or ‘falling behind.’ A lot of it, we have six or seven players who kill penalties, and if we’re taking penalties, those guys are playing a lot early, and vice versa – guys who don’t kill are not getting into the game really,” he said. “It’s just one of those things where the less penalties we take, the better our PK is.”

Dustin Brown, on where the Kings have improved:
We’ve found ways to win, so that’s the most important thing is we’re right there. I think the biggest thing is we need to find more consistency in our game in all areas, whether it’s PK, power play, five-on-five, just be more consistent individually and collectively.