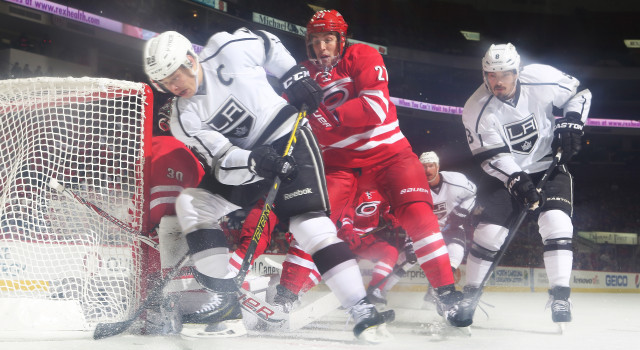 Speaking of inconsistencies, there are the Kings’ special teams numbers. L.A.’s power play is tied for sixth at home, but 27th on the road. The penalty kill ranks sixth at home but 23rd on the road. Darryl Sutter said earlier today that he wasn’t “really sure” whether home and road surroundings affect special teams, though he did note that some players are better at home than on the road, and vice versa.

Dustin Brown isn’t a stats guy – “You guys look at stats more that I think we do,” he said – but did note the team is looking for a more even performance.

“It’s more, I think, about our consistency,” Brown said. “You’re talking about power play, penalty kill. I think it’s throughout our game. We had good chances on the power play. We just have to bear down.”

Like Sutter, he wasn’t able to discern any different feel when setting up special teams at home as compared to the road.

“For a team, we’ve found ways to win on the road before. You look at our record last year, it’s the identical record home and away,” he said. “Again, it’s about our consistency in our game.”

Of course, the special teams splits are indicative of the wider road performance, which at 1-4-4 can be improved significantly. Los Angeles has ceded the first goal in seven of their nine road games and have fallen behind by multiple goals four times. It will be a challenge against a Minnesota team that has outscored teams 16-7 in the first period this season, outshooting them 223-142.

“I think we have spurts of play where we’re really good,” Brown said. “Again, I know I keep on saying consistency, that’s all it’s about for this team. When we play our game consistently, we generally put ourselves in a good chance to win hockey games. Last night, it’s right there and we have a couple minutes where we don’t bear down and they get a lead and [we] have to climb back in. Same thing with Dallas, we don’t get off to a good first period and we played pretty well the two periods after that. It’s just staying on it.”

The Kings are 1-2-0 in the second game of back-to-backs this season.

Brown said that teams don’t play Los Angeles any differently when the team enters a game without a day of rest.

“It’s the same,” he said. “I actually like the second game of a back-to-back. For whatever reason, I feel better. I think the one difference is every team is ready for us now.”