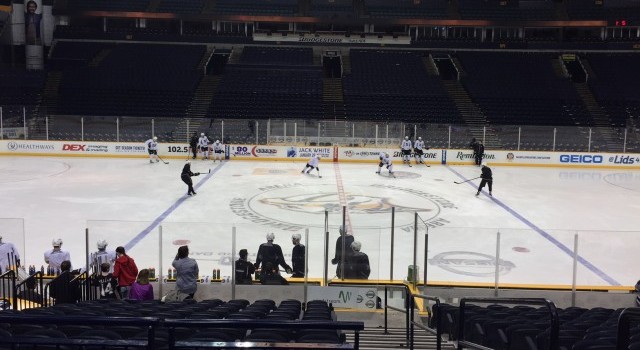 The Kings skated at Bridgestone Arena in advance of tonight’s game against the Nashville Predators. While no line rushes were held during the optional skate, there were developments that could give some indications towards the lineup Darryl Sutter plans on icing in tonight’s game.

-Martin Jones left the ice first. He’s likely to go against the Predators.

-A day after wearing a red no-contact jersey, Alec Martinez participated in the morning skate. He remained on the ice for extra work and conditioning, so he’s out for tonight’s game. While the last two days represented a step forward in his recovery, he reiterated that there’s “no timetable” for his return.

“It’s getting better every day,” he said. “These things have just got to heal.”

Martinez has missed four games since he suffered an injury to his little finger while blocking a shot against Dallas on November 13. He underwent surgery the following morning.

-Jordan Nolan also remained on the ice for extra work, so he’s likely out tonight as well.

-Darryl Sutter didn’t hang around to speak with the media today, but Dean Lombardi held court with Helene Elliott and I, so make sure to check LA Kings Insider and the LA Times sports section later today for stories pertaining to the team’s infusion of salary cap space and an evaluation of the club after having reached the quarter pole.

Among the developments discussed were some of the topics I mentioned on the All the Kings Men Podcast: The Kings aren’t expected to make any immediate roster moves despite the sudden wealth of cap space, and not all of the $4.17 million available will be used because there will be bonuses due to Tyler Toffoli and Tanner Pearson that will reduce some of the capital. There’s good stuff to come.

–Per Forbes, the Kings have a value of $580 million, eighth amongst NHL clubs. The team’s value grew 29% from this time last year. Toronto, the New York Rangers, Montreal, Chicago and Vancouver round out the five highest valued NHL teams, while Tampa Bay, Arizona, Carolina, Columbus and Florida bring up the rear. There are several interesting hockey reads out today via Forbes.