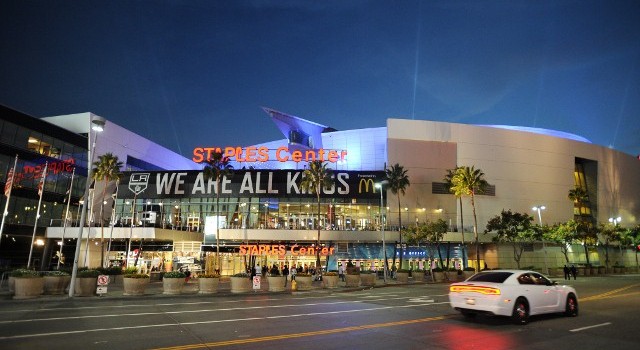 Dean Lombardi spoke with Helene Elliott and I following the morning skate in Nashville today and expanded on some of the news I had shared earlier this week on Twitter, in the comments section, and on this week’s Kings Men Podcast.

In regards to Slava Voynov’s contract coming off the team’s books in a similar fashion to the defenseman being placed on long-term injured reserve, the Kings simply aren’t in the position to use the full $4.18M that would appear to be available today, per CapGeek.com.

That’s because there are performance bonuses tied into Tyler Toffoli’s and Tanner Pearson’s contracts that could potentially cost the team cap space next year, similar to (but not to the extent of) when the Boston Bruins were assessed a $4.75M bonus overage penalty following bonuses that were attained by Jarome Iginla, Torey Krug, Dougie Hamilton and Ryan Spooner, as reported here by CSN New England Bruins reporter Joe Haggerty.

So while the Kings have an infusion of cap space, they’re not necessarily in the position to spend every cent that is currently available to them.

Nor are they planning on making any roster moves in the immediate term.

“I think we’re OK right now in terms of numbers, right?” Dean Lombardi said. “So it’s not just ‘we’re going to go out and blow the cap space to blow it.’ It still has to be the right guy.”

There are two different scenarios worth considering here. The first is whether the Kings would call a player up from Manchester – Jeff Schultz and Andrew Bodnarchuk were names Lombardi referenced – so that they aren’t faced with a scenario in which they’d have to play a player short or with only five defensemen, as has happened this season.

“I don’t think we need to do that now,” Lombardi said.

From a conversation I had earlier this week with hockey operations, the Kings also are wary of making any roster move that would include sending Jamie McBain to the AHL and exposing him to waivers, as defensemen who earn the league minimum are often desirable for teams in need of right-handed shooters from the blue line.

The second scenario is whether the Kings plan on trading for a defenseman that could absorb the minutes and responsibilities lost due to Slava Voynov’s indefinite suspension.

While the Kings now have better clarity as it relates to Voynov, it’s not as if top-four defensemen are falling from the sky – or, as Elliott put it in the conversation with Lombardi – team’s aren’t exactly inclined to be “handing them over.”

“It’s not only ‘not handing them over,’ they’re not available,” Lombardi said. “I mean, because a lot of times to be able to do that, you better have a guy to replace them, because top-four guys are so important to each others’ teams. Again, we’re 20 games in, and who can make that type of arrangement? I don’t see it. But, you never know, right?

“At least now, the only thing that this has done, at least now it gives us the clarity of what we can do, you know what I mean? I think the most frustrating thing for the last month was it just seemed to be dragging. Not only did you have what was going to happen to Slava to drag on, but I don’t see the cap issue. But at least we got clarity on that, so it’s not like when I call people up, I’d say, ‘Well, if this happens, [if] this happens,’ so at least these conversations now, if there’s something there, I don’t have to worry about what the D.A.’s doing or whatever.”