Richards has fared well in Dallas 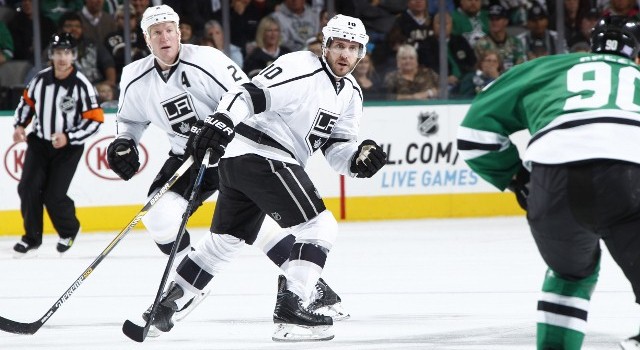 Head to head stats between players and teams aren’t necessarily the most telling statistics, though numbers make it clear that Teemu Selanne, for the better part of his career, had the Kings’ number, and that Tyler Toffoli, over a much smaller sample size, has been extremely effective against the Blackhawks. If a player plays long enough in the NHL, he’ll develop trends against particular teams that will go beyond any arbitrary outpouring of data.

Mike Richards has points in all 10 games he has ever played at the American Airlines Center. Two and a half weeks ago he kept his streak alive with an assist in Los Angeles’ 3-1 win, pushing his stat line on the road against Dallas to three goals and 14 points.

With four goals and 21 points in 22 games, his overall career numbers against the Stars are impressive.

Numbers in the past are mostly irrelevant heading into tonight’s road trip opener; against a team like Dallas, Richards’ defensive credentials and 200-foot intuition will be vital against a team that has several players that can stretch the ice in creating end-to-end opportunities that opposing teams would rather avoid.

“They’ve got some skill players that probably like to do that,” Richards said. “Then they also have some players that like to grind it out, too. So you just have to be aware of who you’re on the ice with to recognize what the style of game that you’re going to have to play.”

Having taken a hard Tim Gleason glove to the face when making a move towards the front of the net on Tanner Pearson’s goal Thursday night (he earned an assist on the play), Richards would like to see the ability in getting bodies and pucks to the net replicated.

“Yeah, we did well with that,” he said. “There are still a couple things that we obviously can work on, but a win is the most important thing. As long as you can get those wins, still work on things and get better, that’s obviously the plan.”

Mike Richards, on playing against Jamie Benn and Jason Spezza:
Well, Jason is just a good playmaker and probably more of a passer than a shooter. He’s just really good in open ice and seems to always make the right play. Jamie is a big guy who has a good shot and works hard and is just an all-around good hockey player in every aspect. A lot of similarities with how big they are and how they play. But I think Jamie is more of a shooter and Jason is more of a passer.