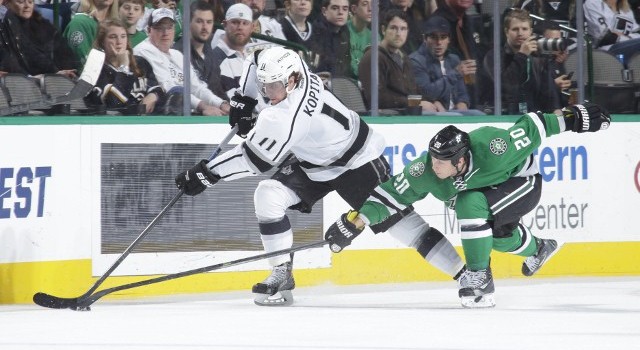 On the Kings’ start:
I think we both had great opportunities in the first period. They scored on theirs and we didn’t. It was an exciting first period.

On whether the three unsuccessful first period power plays were “game-changers”:
Our power play’s not going to win or lose us games. The power gave us a chance in the third. I thought our penalty killing was not as good as our power play.

On whether his quote “It’s not always whether you win or lose. It’s whether you’re winning or losing” applies in a game in which the Kings finished the game strong:
I hadn’t thought about that. I’ll have to look that one up.

On whether the lack of road wins bothers him:
Yes, it does. I think tonight what bothers me more is that it was the season series, and if you base it on the three games and then break it down as individuals you’re going to see why we lost the series.

On the Kings scoring three goals off rebounds:
Generally most goals are scored in the league on screens, tips and rebounds. Hey, I thought tonight was an exciting game.

On whether he felt the earthquake:
There were lots in the first period. [Reporter: There was an actual earthquake in the third period.] Really? Been through lots of ‘em.