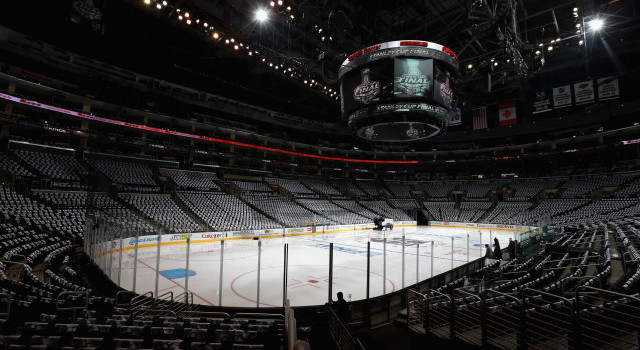 The entirety of the NHL’s release:

The National Hockey League announced today that the existing terms of its suspension of Los Angeles Kings’ Player Slava Voynov will be continued indefinitely.

However, in light of the uncertain and potentially extended period of time that the legal process may entail, the NHL and NHLPA have agreed to permit the Kings to replace Mr. Voynov’s Salary and Bonuses pursuant to the Bona Fide Long-Term Injury Exception under the terms of the NHL/NHLPA Collective Bargaining Agreement.

The major personnel-affecting development caused by Slava Voynov’s legal status has been addressed. With the league’s decision, Voynov’s average annual salary no longer counts against the team’s cap, which affords the club greater flexibility to be able to recall players from AHL-Manchester as needed, or to acquire a more long-term asset via trade. The Kings played with only 17 skaters in a shootout loss to Philadelphia in late October and were forced to use an emergency recall on David Van der Gulik for the following game in Pittsburgh; against Vancouver two Saturdays ago, Los Angeles used an askew 13 forward/five defenseman ratio due to similar roster move restrictions.

Per Cap Geek, the Kings now have 4.18 million dollars of space with the removal of Voynov’s $4.17M cap hit. Voynov will continue to be paid by the Kings during his indefinite suspension, which was administered by the NHL.

Via Pierre LeBrun’s story on ESPN.com:

And for those wondering how other NHL teams feel about this: Every single team executive we spoke with over the past few weeks felt the Kings should get some form of salary cap relief. Let’s not kid ourselves here, other teams realize that they could have a player in a similar position down the road. Nobody feels the Kings as a whole should be paying the price in terms of the salary cap and competitive balance because of an alleged off-ice mistake by one player.

On Voynov cap hit solution: NHLPA and NHL were going back and forth all day on it before coming to an agreement.