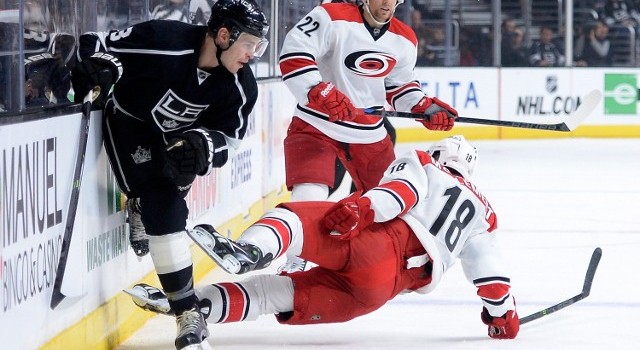 With the injuries and personnel issues that have impacted the Kings defense through the first 20 games, opportunity has allowed players to inherit wider roles. No player represents the absorption of opportunity as much as Brayden McNabb, who has appeared in all 20 games – totaling four assists and a plus-two rating – and has seen his usage expand as Alec Martinez recovers from surgery on his pinky.

McNabb averaged 21:19 of ice time during the team’s recent four-game homestand, totaling 10 hits, four blocked shots and 11 shot attempts (producing two shots on goal). He has also been connecting more often on open ice hits when he locks on to an attacker looking to create something with a controlled zone entry:

John Stevens, on whether repetitions have facilitated Brayden McNabb’s recent improvement:
I think his play is a direct result related to the minutes he’s playing. I think he understands from the coaching staff that we want him to have a real firm identity as a player. I think any team that’s a good team has a real strong identity. I think any player that’s a good player has a strong identity. That’s something that he has really focused on. I think if you look at the last three games he’s played, you’re looking at the same guy every night. He’s a really firm defender. He’s getting to pucks quickly and he’s making good outlet plays and he’s even finding second option plays. Because of that, he’s spending less time in his own end and I think he feels better, has more energy because he’s playing the game more on the other end because of it. But I think the big thing for us is that he has played to his identity consistently for the last few games, which might not have been there earlier in the year.

Stevens, on whether McNabb is demonstrating more poise in the offensive end:
I think his whole game is predicated on what he does in his own end. I think that’s what you’re seeing. He’s doing a good job defending. He’s doing a better job defending down low and he’s making a lot more firm plays with the puck. That allows us to get out of our zone with speed and numbers and it draws penalties and leads to good things in the offensive zone. It sets us up for offensive zone success. We’ve always felt that he’s had poise. We’ve always felt he sees the ice well. We just wanted more pace to his game and a little more firmness to his game and he’s done that lately.

Matt Greene, on Brayden McNabb:
I played with him a lot during training camp, at the beginning of the year. He’s really easy to play with, a really good player. I’m just kind of reading off of him and he’s doing a great job out there. He’s been playing really well for a while now.

Greene, on whether the defense ever takes Jonathan Quick for granted:
He makes us look a lot better than we actually are. I think that’s it. Having both of those guys back there for you helps the defense out a lot. Both of those guys are huge parts of this team and it makes things a little easier on us. It helps us through this transition period.

Greene, on goals for the upcoming road trip:
Just get points. I think we’ve been struggling on the road to start the year. We’ve got to come out and get going. That’s been our strength the last few years. We’ve got to be a good road team. We’ve got to get it going on this trip, get points to keep pace with a lot of guys, and keep climbing up the standings.

Greene, on what he’d like to see from the team on the road:
Just attention to detail from the start of the game, no mental mistakes at all, first, great first periods – we don’t have to be winning the game after the first period, but you want to make sure you establish your game plan. You’ve come out and you’ve done what you wanted to do and things will go from there. That’s what you want right there on the road, a good start and attention to detail.