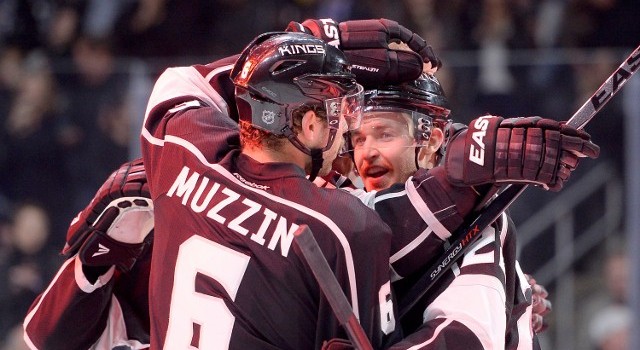 With the quarter-pole providing a natural jump-off point for player evaluation – Darryl Sutter said today that “I have to do a report card on each player after 20 games in my own mind” – one player who has been ahead of the curve while healthy this year has been Trevor Lewis.

Leading all Kings forwards with a +11.2% shots-for percentage comparable to his teammates, Lewis, who posted even strength Fenwick-relative percentages of -2.5%, -3.6%, -0.1% and -4.6% over his four full seasons with the team, is clearly in the black possession wise, ranking second on the team with a plus-7.0 Fenwick relative percentage while at even strength.

He’s also firing away. Lewis’ 33 shots on goal rank sixth amongst club forwards, an impressive mark considering Lewis missed nine games due to injury. Is there any special method behind his higher shot totals?

“No, he’s always a shot guy,” Darryl Sutter said. “But the key there is he’s one of the guys who puts pucks at the goalie from a lot of different areas. So he’s trying to improve his chances of scoring a goal.”

“Yeah, I mean, you never know what happens when you throw it at the net,” Lewis said. “I think that’s kind of a big thing I focused on over the summer, kind of watching some guys and how they get more open and get more shots to the net.”

Sutter doesn’t read much into the raised shot total or the spike in production – though he sees it as a nice perk.

“No, he plays two positions for us, kills penalties, a reliable guy in his own end. Pretty much the same player,” he said. “You know what? You pull for Lewie to score more. It’s what you do.”

The production may not be sustainable and it’s obviously a small sample size, so it wouldn’t be a surprise if the career 4.6% shooter’s production drops off. But if you’re looking for an explanation of why he has been placed on the Kings’ top line, remember that it’s a meritocracy – and cite this guide.

Trevor Lewis, on whether skating on a line with Anze Kopitar and Marian Gaborik affects his game:
Yeah, it’s no secret what I’m on the line for. It’s to get in there, get speed and get those guys the puck and then get to the net. They make great plays and I just have to get open and get shots.

Lewis, on skating with Kopitar and Gaborik:
It was good. They are all good skaters. They make the right plays and like I said, I just have to get to the net and get open and good things will happen.

Lewis, on whether the forwards feel pressure to help the defensemen:
Definitely I think the more time you spend in their offensive zone, the easier it is on our D and on all of us really. If we can get open and let them move pucks quick to us, we can get out of our zone and get in the offensive zone more.