Unclear if Pearson plays; King talks about his return 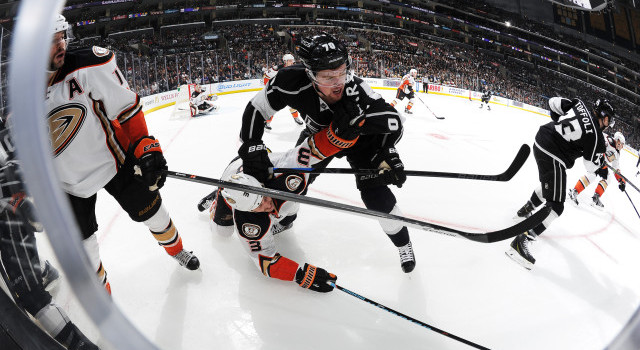 It is unclear whether Tanner Pearson, who skated as part of a four-man group at practice yesterday alongside Dwight King, Jeff Carter and Tyler Toffoli, will play tonight.

Darryl Sutter gave the impression yesterday that he was looking for more from Pearson, who has totaled one assist in his last 11 games but was the league’s Rookie of the Month in October.

“I think his whole game has to come back again in terms of the determination and the whole three-zone thing,” Sutter said yesterday. “The goals are the end result of a lot of work.”

Sutter also spoke about Pearson today and said that one aspect of his game that is lacking is “probably five or six years of experience.”

Today, Pearson answered questions without knowing or disclosing if he’d be in the lineup against Carolina. He left the ice at his usual time – usually an indication that he’d be in the game – though Andy Andreoff and Jordan Nolan didn’t remain out for much longer with Martin Jones.

King was scratched for the Anaheim game on Saturday before returning on Tuesday to record an assist, a plus-one rating and two hits in 15:51 of ice time in a 5-2 win over Florida.

“It was nice that they gave me an opportunity to get right back to a regular line that plays decent minutes,” King said. “We had a little bit of success. Obviously a little rust off the hop, but it’s a progress and it’s a long season so I just have to keep working at it.”

As for any exchange with the coaching staff prior to his scratch against Anaheim, King said, “To be honest, there wasn’t much said.”

“When you sit out, you know there is more you can do. For me, I think it’s more of an effort thing, win battles, compete for second and third opportunities. Things like that get noticed, something I need to be a little better at.”

Tanner Pearson, on how the forwards can help the defense:
I think when we’re quicker out of our zone, we’re most effective challenging other teams’ D. We’ve got a pretty quick team up front. We’ve just got to get the puck out of our end and move forward.

Pearson, on the variety of players getting power play opportunities:
Yeah, obviously last year was kind of like that too. And then Gabby came in and he and Kopi and Carts kind of clicked and I think there was one point last night when they were on. I think right now our power play is moving in the right direction.

Dwight King, on whether he watches the game when he’s out of the lineup:
No, we’re actually downstairs doing the weights and whatnot – you have to do to keep conditioned. You do watch. You’re pretty much family with these guys, so you cheer them on. Obviously they had a great game, the one I watched. It was good for the boys.

King, on any motivation to beat Carolina after the earlier loss:
We don’t play them a ton, so we get our chance to solve the season record with them. It’s an opportunity for us to get better, like you said, which is the main thing. But just play a better game and show them that we’re a better team than we were in Carolina.