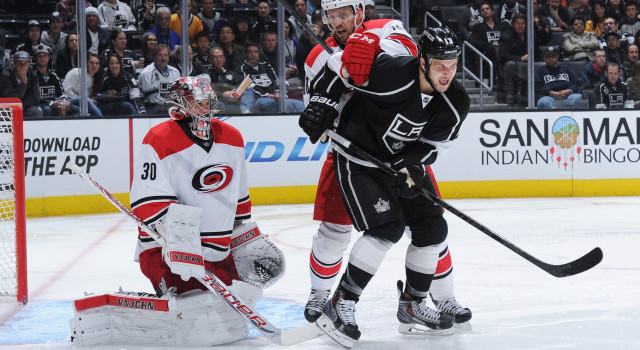 -With the win, Los Angeles improved to 34-27-10 all-time against the Carolina/Hartford franchise, a record that includes a home mark of 21-11-3. The Kings have won a franchise record four consecutive home games in the series since a 3-2 setback at Staples Center on December 8, 2005.

-Los Angeles is 6-for-12 on the power play over the last three games.

-Nine of the last 11 games between the two teams have been decided by one goal.

-Mike Richards played in his 199th consecutive game, and Darryl Sutter coached his 199th regular season game with the Kings.

-Jarrett Stoll scored his second PPG of the season. He has three points in the last three games.

The Kings are scheduled to practice at Toyota Sports Center at 11:00 a.m. Friday before traveling to Dallas.