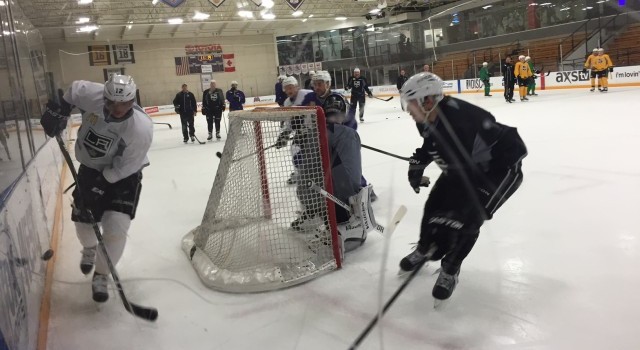 Notes from this morning’s practice at Toyota Sports Center:

-A special visitor took the ice shortly before the full team today.

Alec Martinez on the ice for a skate prior to @lakings practice this morning. pic.twitter.com/hEH5GeMIPo

He didn’t stick around to practice with the team. Per Dean Lombardi, Martinez is expected to miss one week after suffering a finger injury last Thursday that necessitated a surgical procedure. Whether he’ll be available against Carolina will be revealed during tomorrow’s morning skate.

-Lines! There were some adjustments, based on color coordinated practice jerseys.

The noticeable adjustments include a reunion of Brown-Stoll-Williams and Pearson alongside King, Carter and Toffoli. Sutter was asked what Pearson had to do to get his game going again, and part of his response included this quote:

Sutter, on Pearson: "I think his whole game has to come back again in terms of the determination and the whole three-zone thing."

More to come on this subject this afternoon.

-The team took part in battle drills today, which allowed a close-up and slowed down look at some Drew Doughty stickhandling.