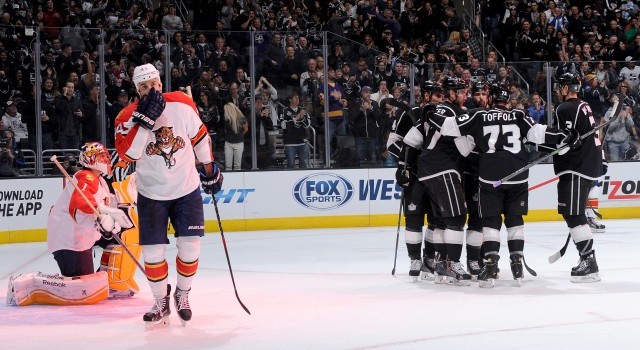 The Kings have scored five power play goals over the last two games, and when identifying the goal scorers, it doesn’t appear as though there is cause for alarm. Anze Kopitar, Jarret Stoll, Jeff Carter, Marian Gaborik and Dustin Brown – the club’s recent power play goal scorers – all see ample time on the man advantage, which jumped up to 20th in the league at 17.5% after the two most recent games.

But based on some comments by Darryl Sutter on Wednesday, some personnel concerns remain.

The need for more production from top players has been a familiar refrain early in the 2014-15 season, with four high profile players in Mike Richards, Justin Williams, Marian Gaborik and Dustin Brown all averaging less than half a point per game, and Anze Kopitar, the Kings’ leading scorer for the last seven seasons, currently tied for third on the team with 10 points (5-5=10) in 16 games.

Meanwhile, Tanner Pearson, whose shot rate is up this season – though he has registered zero or one shot on goal in seven of the last 10 games – could stand to improve his even strength game, given some of Sutter’s comments today. Pearson has one assist in his last 11 games and skated as part of three wings surrounding Jeff Carter at practice on Wednesday, which could be an indication that he won’t play against Carolina on Thursday.

“I think his whole game has to come back again in terms of the determination and the whole three-zone thing,” Sutter said when asked what Pearson has to do to get his game back on track. “The goals are the end result of a lot of work.”

Sutter quickly tabled a follow-up discussion over whether the opposition is adjusting to the forward who is tied for second amongst rookie skaters with seven goals.

“I think it’s an issue with a lot of our forwards in terms of making plays on the boards,” Sutter said. “…I think that our guys, there’s no question about work or anything like that or knowing your responsibilities, but there are times during the game where you spend time in your zone where you could’ve made a play on the wall that requires you to get hit or some contact or traffic. It’s an area that especially young players have to work at. This is a tough league. Hey, we’ve got 14 forwards. Guys have got to sit out to watch, maybe analyze their own game, then that’s what we’re doing. We’ve already done it and we’ll do it again tomorrow, we’ll do it again every game if we have 14 forwards. Play the right way. The way the schedule is – and again, I hate to beat on it – but only having six defensemen, up front we have to play a hell of a lot better. We can’t have average players, and again with the schedule playing every other day or back-to-backs, you need a lot more when you ask about guys that are struggling offensively, it’s the whole package part of it for those guys. That’s why we’re moving guys around, that’s why guys are going in and out of the lineup. We’re trying to win a hockey game, so I look at tomorrow as the last game of the season for us. We’ll put the lineup in that we think has the best chance to play well against Carolina.”

Jake Muzzin, on the defense taking pressure off the forwards last night:
I don’t think they really expect all of us to produce ever game like that. But it helps when you get production from everyone. Hockey is a team sport and you need everyone to produce. Some nights it’s going to be some guys and some nights it’s going to be other guys. Last night, it was the D that – we didn’t step up – we produced some offense. For sure it will take some pressure off when other people are stepping up. At the end of the day, everyone wants to win. If you’re not producing numbers or what not, you’re doing something productive for the team, then you’re helping us win. That’s what we need.