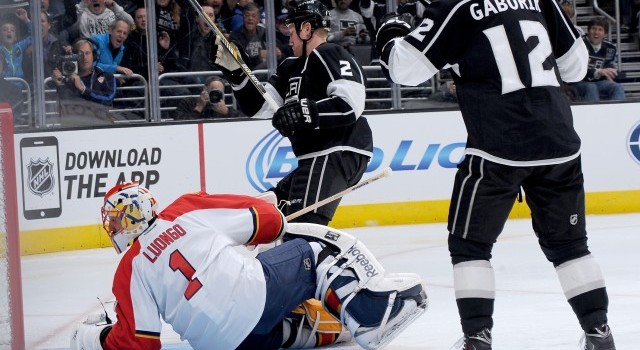 The Brayden McNabb – Matt Greene partnership was discussed on LAKI yesterday, and many of the same discussion points are applicable today as well. Greene, who thinks highly of his new defensive partner, has provided an effective counterbalance to a less-experienced player who is growing within the National Hockey League as part of a wide opportunity afforded him due to personnel and injury issues.

“I think he’s playing well. He’s playing well, he’s moving the puck well,” Greene said Wednesday. “He’s getting rewarded for it on the score sheet. I think he’s been doing a good job for us all year. He’s developing. He’s only going to get better. It’s fun to see him have success.”

Their chemistry hit a high point in Tuesday’s 5-2 Kings win when the duo opened the scoring following some supreme Anze Kopitar puck protection along the right wing boards early in the second period. Kopitar eventually found McNabb, who used a slap/pass from up high to find Greene, who was creeping towards the net.

“I was just trying to open up some ice for the forwards,” Greene said. “Kopi comes up the wall, so you just try to get out of his way and drop down. That’s something that we work on in practice. I found myself down there, kind of out of position, but then the puck came. So that was it. If he’s coming up the wall, you just go to the middle to try to open up some space for him. Create something, you have to dive in and get back out again. For that one, I just kind of stayed down for a second.”

Greene, who scored from close range in a playoff win at St. Louis in 2012 but claimed to have never previously scored on a deflection, saw the play develop.

“I saw the pass. I saw him look at me so I figured I’d stay there for a second. It’s not going to happen again. I’m not going to try that play again. That’s a once-in-a-lifetime-deal there.”

The humor continued when he was asked about what had influenced his post-goal reaction.

“What am I doing down here? That’s the first thing [I thought of],” he said. “It’s just a weird deal, weird deal. I shouldn’t have been there in the first place, then you get a backdoor tap in. It’s kind of a funny way the game works.”