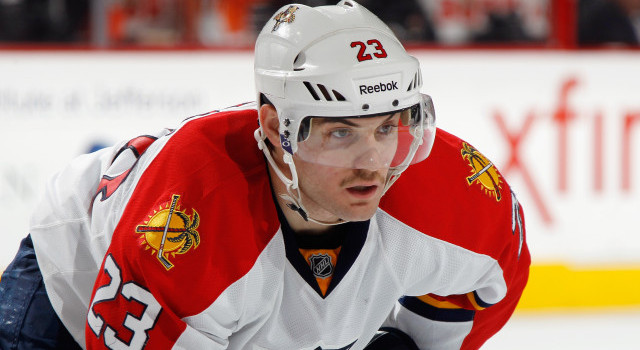 Florida forward Rocco Grimaldi, benefiting from a morning start time in San Antonio earlier today, was pulled from his team’s eventual 4-3 shootout victory over Oklahoma City and jettisoned to Los Angeles so that he’d be able to play in place of Aleksander Barkov, who missed Thursday’s game due to illness.

“My mom was actually in San Antonio this morning for the game and she flew back right away too,” Grimaldi said. “So, she did a double-header too, just me and mom.”

It was a homecoming for the five-foot-six skilled forward who scored the game-tying and game-winning goals for the United States in a 3-1 gold medal game triumph over Sweden at the 2013 World Junior Championships. Having grown up in Rossmoor, just outside of Long Beach, Grimaldi held a unique homecoming as part of only his fifth NHL game.

“It’s special, obviously,” he said. “This is one of the games on the calendar that I really wanted to play in, and obviously didn’t expect to going into this morning. I was just getting ready for Oklahoma City, and I got pulled off after the second period and told I was coming home. So obviously I was excited, and glad that some family and friends were able to come out.”

In 10:36 of ice time against Los Angeles, Grimaldi totaled two shots on goal, one hit, one takeaway, two penalty minutes and an even rating. Against Oklahoma City this morning, he registered three shots on goal in two periods.

On getting pulled off the ice to get called up to Florida:
I didn’t even know that was possible to happen. I don’t know if it’s ever happened before, but obviously I was excited. I wanted to finish the game, it was a close game, I’m glad our guys got the win, but right when they told me I was going, I had to start focusing on this game and getting my body ready to go.

On the hectic travel to make it in time for the game:
It was different, I had to rush out of the rink there with the game still going on, drive back to my place, pack my bags quick. My Mom was with me too, so we had to grab her stuff too. Then we had to go to the airport, the flight was delayed about a half an hour, I wasn’t sure if I was going to make it here. I finally got here, I had to get shuttled to the baggage claim, then stuck in LA traffic which I’m pretty used to, then I got here maybe a half hour late. Those things happen, and you just have to be prepared for whatever comes, and I thought I did a pretty good job of getting ready for the game.