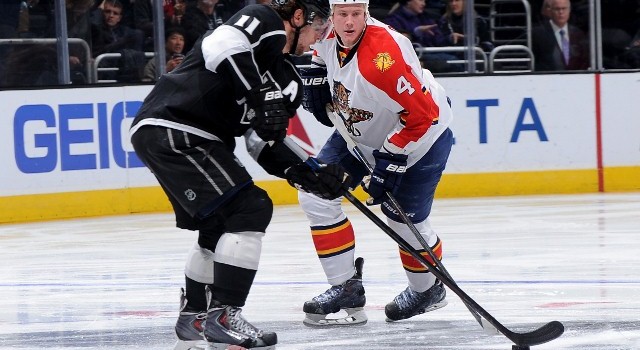 Regehr, on his goal:
Really just Jeff Carter using his speed to create a turnover in chasing down their defensemen, and then him throwing the puck out, it ended up coming out kind of in the mid-to-high slot there where their forwards couldn’t get it, so I knew there wasn’t a lot of time left in the period, so I was down, pretty aggressive, and just tried to shoot it at the net.

Regehr, on whether Brayden McNabb is getting more comfortable on and off the ice:
I think you’ll have to ask him that if you really want to get into his feelings, but for me, I can speak about how he looks out on the ice and talking to him just in the dressing room, and I think he is feeling a little bit more in his place, a little bit more settled. With that, I think he’s gaining some confidence because he’s playing regularly now and you end up getting in a groove and in a rhythm, and I think he’s done that. His game is a simple game. He’s backing back to pucks, moving pucks up and being physical. Tonight he did a good job on the offensive side chipping in with a couple points, and a really nice play to Matt Greene on the shot-pass.

Anze Kopitar, on whether the team is finding its offensive balance:
Yeah, I mean I think offensively we want to spend a little bit more time in the offensive zone, obviously. I think we’re getting better at it. We’re on the right track but we can still be better. We’re going to work at it and try and get better.

Kopitar, on Matt Greene and Robyn Regehr scoring:
I didn’t think it was Greenie at first because I didn’t know he had that in his repertoire. No, but it was a great play. It was a great play from Brayden to see him, and obviously a great tip to get us on the board, and then Reg just following up the play and just being on the spot.

Kopitar, on seeing Willie Mitchell again:
It was just briefly on the faceoff. It seemed like he was holding it back a little bit when they announced it. But it was good to see him, for sure.

Kopitar, on protecting the puck before Greene’s goal:
I mean, I didn’t think about it specifically. It’s one of those things where you go in the zone and you tray and protect the puck as good as you can, and it worked out well.