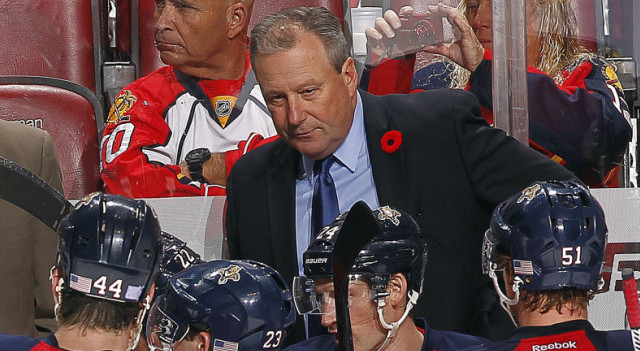 Of the 25 players to have entered into a game with the Los Angeles Kings this season, 13 played at one point under Mark Morris, the winningest head coach in Manchester Monarchs history and the only coach to have recorded at least 300 wins at both the collegiate and professional levels.

Morris, who did not have his contract renewed by Los Angeles after eight seasons in Manchester, signed with the Florida Panthers in July to serve as an assistant coach under Gerard Gallant. Morris works primarily with Florida’s defensemen, and after 15 games the Panthers rank 10th in the league with an average of 2.33 goals against per game.

Following Florida’s practice in El Segundo on Monday, I spoke with Mark about Tyler Toffoli and Tanner Pearson’s development, as well as what he sees in 18-year-old rookie blueliner Aaron Ekblad, who was selected first overall at the 2014 NHL Draft..

Mark Morris, on the pride of seeing Tyler Toffoli and other young players in the NHL:
I’d like to take the credit, but he’s a darn good hockey player. For sure there is a lot of pride in watching the young guys have success. You have an idea of how far they were able to come and seeing them have success now is real heartwarming for, not only myself, but everybody that had a chance to work with them. They’re special talents and boy, they’re hitting on all cylinders now.

Morris, on Tyler Toffoli and Tanner Pearson’s penalty killing:
We had an opportunity to put them in defensive roles when they’re primarily noted for their offense. They’ve really embraced the opportunity to defend and kill penalties and they’re a threat when they’re shorthanded. That’s a double threat there. Teams are knowing that if they turn the puck over that it might end up in the back of their net. It’s good to see those guys doing the things they’re doing right now and at such an early stage in their careers.

Morris, on coaching a Florida team that has several high profile young players:
It’s funny. It seems like the older you get, the more you realize that if you can teach in small doses you get a lot more. You have a lot more to offer. I think as a younger coach, I might want to have spent way more time trying to teach them everything all at once. But it gets old in a hurry. If you can just tweak things from time to time and try to help them with their confidence, I think that’s key. Watching Ekblad from where he started at the beginning of this year, he was hearing a lot of voices. I remember Jake Muzzin having the same thing. I said everybody is trying to help them, but sometimes it clouds their minds. Shortly before Muzz came up, I remember I went over and said something to him and he said ‘I just wish people would stop talking to me right now.’ I told Ek that same story. I said ‘Listen, you just have to play. We’ll fill in the detail in your game as your career rounds itself out. But right now, you just have to play.’ I think that’s probably one of the messages I would impart with any young coach. Take your foot off the gas pedal from time to time so they can feel confident that they’re still a good hockey player. It’s nice that everyone wants to help, but sometimes it’s just too much, too soon.

Morris, on his transition from being a head coach to an assistant coach:
It’s been a big change. I think your natural instincts are to try to take control, but there can only be one guy, one captain of the ship. For me, it’s been a huge challenge just trying to figure out where I can help out and my primary responsibilities just with the six or seven D. I’ve tried to get my arms around that and really focus on that as my job. So far, I’ve really enjoyed working with these guys. They seem to be real coachable. We have a lot to learn, but I like the idea that Willie helps lead the way and we have a relationship that goes way back. When he can parlay the things that he knows I expect and what the organization expects, it’s easy to sell.