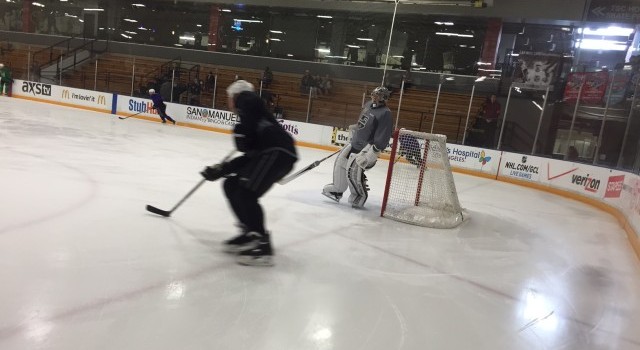 Good morning from El Segundo, where the Kings took the ice at Toyota Sports Center shortly before 10:00 a.m. on Monday.

-Alec Martinez didn’t skate with the team today as he recovers from a procedure on his finger that is expected to sideline him for a week.

-Robyn Regehr, who played on Saturday following a two-game absence due to an undisclosed injury, spoke about his return to the lineup and what he’ll look to build on for Tuesday’s game in Florida; that story will go up later today. Speaking of the Panthers, Willie Mitchell will be back in the Kings’ facility for a practice later today. Both Drew Doughty and Regehr weighed in on their loquacious former teammate’s return to Los Angeles.

“We’ll, I’m sure, talk about sustainable fish farming and all the other things he enlightened us about,” Regehr joked.

-A crew from Epix was on hand to shoot promotional videos in advance of the series that will cover the lead-up to the Kings-Sharks Stadium Series game at Levi’s Stadium on February 21. It was a large crew at the facility, though Darryl Sutter has previously spoken about why having cameras in team areas isn’t that big of a deal.

-Lots more to come – including more Rob Blake and Hockey Hall of Fame coverage – on a busy day from the Kings’ facility.