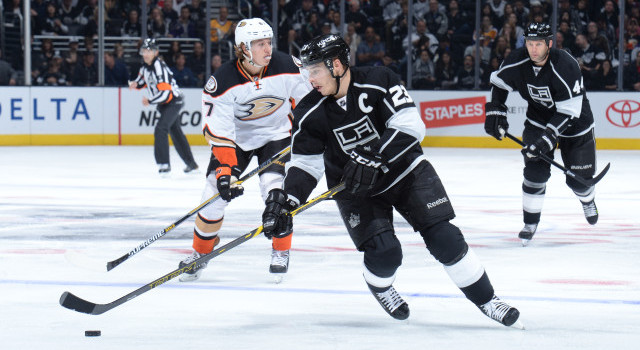 On being lifted by a big power play goal and important kills:
I think all our goals were special teams – four-on-four, five-on-four and shorthanded.

On how “nice” it was to get a win and “back on track”
Every win’s nice. Every game is its own season with not “back on” anything. We played just as well the last game as we did tonight. Just you’ve got to score to win, and you’ve got to keep the other team limited.

On the difference between Saturday’s game and Wednesday’s game:
One’s a shootout game, one’s an overtime game, so it tells you how close they are.

On what he learned that will prepare for future Anaheim games:
I couldn’t even tell you when we play ‘em again. [Doctor enters room] Hey doc. You guys need any dental work?

On why the Kings have been a strong third period team:
Well, if you’re just basing it on tonight, we drew a couple penalties in the third period and score don one of ‘em. If you base it on overtime, we drew a penalty in overtime. And I couldn’t give you [anything] clearer than that. We’re a different team than we were, obviously.

On whether he was “nervous” that Matt Greene fought early in the game:
No, we play a contact sport and once in a while that happens.

On Tyler Toffoli:
He scored a shorthanded goal. A big goal for us in the big picture when you’re coming off a game where you didn’t score. Five-on-five we haven’t been getting a lot from our top guys, so for Tyler to score shorthanded is big for us.