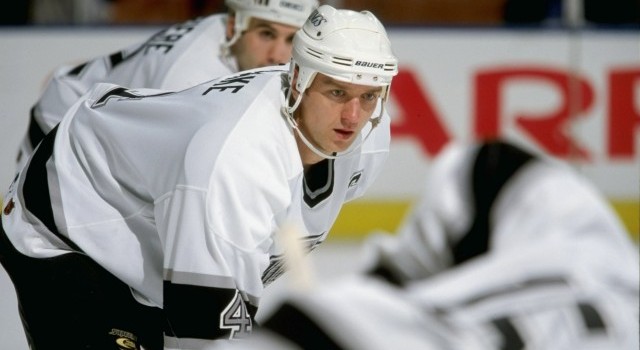 Before he made his debut with Los Angeles in March, 1990, Blake was a standout at Bowling Green State University, where he played alongside future Kings in Nelson Emerson and Dan Bylsma. Because the Internet was in its infancy and there wasn’t as bright a spotlight on hockey prospects at the time, there wasn’t a clear sense of when exactly he’d be selected.

“I didn’t know,” Blake said. “The speculation was the third round. Based on communication with my coach at Bowling Green and things, they felt that somewhere around the third round is where you’re going to go. The third round came, and then we got into the fourth round. There wasn’t a definite anywhere, but it was enough that I decided to go to the draft. A lot of players might not choose that, but I felt it was something to go to.”

The 1988 NHL Draft was held at the Montreal Forum – as it was during much of the 1980’s – and Blake hadn’t had any interactions with the Kings during his draft year.

“I interviewed two teams before the draft,” he said. “It wasn’t big then, maybe Washington and it might have been Jersey. I can’t remember. It was two teams I interviewed with, so I thought maybe I had a chance at going to one of those two. And out of nowhere, it was LA. It was just like so far away. Within a year and a half, I was flying out there.”

The 1988 NHL Draft occurred a month and a half before the Kings acquired Wayne Gretzky from the Oilers, and after being selected in the fourth round, 70th overall, Blake received some of the last paraphernalia to be produced prior to the color change to silver and black.

“It was funny, I get drafted in the purple – you know now they hand out jerseys and hats and everything – I think I got a sweatshirt that said Kings in purple. I’m sure my mom has it at her house. It was the furthest away that I would have expected.”

Mike Modano, selected first overall at the 1988 NHL Draft, is one of this weekend’s inductees, along with Peter Forsberg, Dominik Hasek, Bill McCreary and the late Pat Burns.

Because Modano, an American, forged a path in Canadian major junior hockey, and Blake, a Simcoe, Ontario native, decided to play college hockey in Northwestern Ohio, the two hadn’t crossed many paths in the lead-up to the draft. That ultimately changed when both were well-established NHL stars who participated in the 1996 World Cup of Hockey, when the United States defeated Canada in a best-of-three final series.

“The World Cup, he was a young kid then, I was a young kid. That’s when they beat us in Montreal,” Blake said. “It kind of set the stage for him, Tkachuk, Roenick, Guerin, all those young guys started coming in the picture with Hull and some of the older Americans. He was part of that whole group that regenerated that.”

Via LAKings.com: At home with Brandy Blake