Regehr hopeful he gets the nod on Saturday 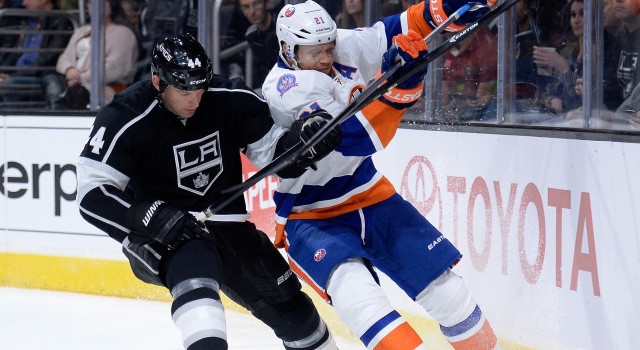 Robyn Regehr was an active participant at today’s practice, only 24 hours after he took the ice for the first time since suffering an undisclosed injury on the final shift of overtime during a 2-1 shootout loss to the New York Islanders on November 6.

A day after skating apart from the team, Regehr saw time alongside Jamie McBain during defensive drills on Friday and after leaving the ice gave an indication that he could play against Anaheim Saturday afternoon.

“I hope so,” he said. “Talk to the boss about that one. I don’t make those decisions.”

Reporters spoke with the boss, who said that “we’re really not sure” if Regehr will re-enter the lineup.

“It’ll be more Robyn’s call tomorrow,” Darryl Sutter said. “With an afternoon game, too, it kind of tightens it up. We’ll just kind of let him make that call and go from there.”

“I talk to Robyn a lot, but at the end of the day, I’m not going to push somebody out there that’s not ready to play.”

If it’s up to Regehr, that’s an encouraging sign that the Kings will, in fact, be able to ice six defensemen on Saturday. Alec Martinez, according to general manager Dean Lombardi, underwent surgery this morning to fix a finger that was injured during the second period of Thursday’s loss to Dallas.

“Things progressed nicely,” Regehr said. “I worked hard in the gym and it’s just been a little bit over a week now. I view it as kind of like coming back from a little bit extended All-Star Break or something like that. You get a couple of good ice sessions in, get back into it and hope I’m in there and can help the team tomorrow.”

Tomorrow – as in only nine days after experiencing an injury that kept him off the ice for a week.

“It was only an undisclosed injury,” Regehr joked. “Those ones are usually pretty quick.”

Robyn Regehr, on whether two on-ice sessions will prepare him for Saturday:
It’s always nice to have more. But I feel that things are good and I don’t feel like I’m causing any undue, unnecessary risk really at this point. I hope to play tomorrow.