The View from Anaheim 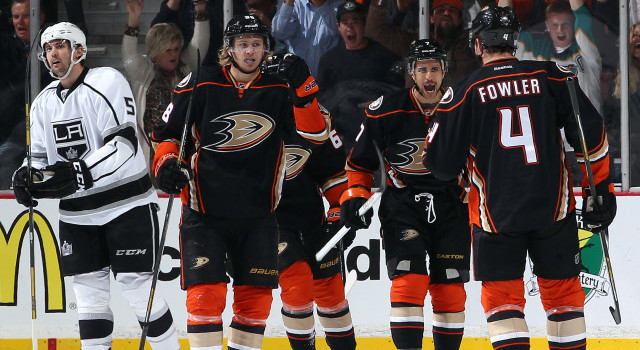 Lance Pugmire: Ducks take Round 1 against Kings, 6-5 in a shootout

“The Ducks’ major offseason answer to the Kings’ playoff loss, Kesler finished with two goals, an assist and the decisive shootout goal.”

Lisa Dillman: Takeaways from the Kings’ 6-5 shootout loss to Ducks

“There is often plenty of room in the doghouse of Kings Coach Darryl Sutter. On Wednesday, Tanner Pearson and Tyler Toffoli settled into the kids’ wing.”

“Both teams were shorthanded, in terms of personnel, but the Kings, who hadn’t played since Saturday, looked sloppy and tired while the Ducks looked sharp, even if the scoreboard didn’t always indicate it.”

“So important or not, meaningful or not, this one was fun. And, even for Kings fans, there was good news at the end.”

“The five goals were bad, and probably due to some poor defensive play. However, Andersen and LaBarbera both gave up soft goals that made this climb more difficult than it had to be.”