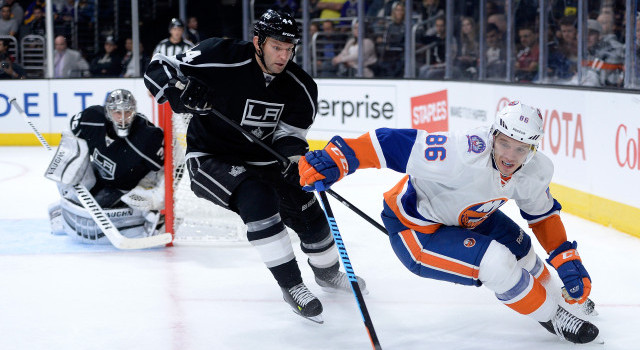 Robyn Regehr skated today for the first time since suffering an undisclosed injury late in last Thursday’s shootout loss to the New York Islanders. His on-ice session, which took part in between an optional morning skate and Slava Voynov’s skate, lasted in the realm of half an hour.

“It felt really good,” Regehr said. “I just felt like I’ve been off the ice for a week. I’m going to have to put the work in here to get through that and do the conditioning and handling pucks and going through little drills as much as I can. Try to get up to speed as quickly as possible.”

Getting up to speed won’t come immediately. While originally noted that the injury could sideline the veteran defenseman for seven-to-10 days, no clear picture of his return will come until he starts practicing with the full group.

“I think you can’t really have a set, hard timeline because you just have to see what it’s like tomorrow,” he said. “If it’s another positive day and things feel good, then I can push it even more. On the other side of that, if things don’t feel good then we’ll have some decisions to make on what we do because I don’t want anything to continue to nag throughout the season. You want to be able to get back as quickly as possible, but you don’t want to be in there for one or two games and put yourself in a position to be out for another week or two after that.”

Regehr, who left the ice early in a Kings practice last Friday, said that the injury occurred on the final shift of overtime during last Thursday’s game against the New York Islanders.

“It was just one play in the game with I believe it was Grabovski driving the net. I had to turn to take him and we kind of got tangled up a little bit. I’m not sure why it happened, but it’s just one of those things that happened very quickly. I don’t know if I was at a bad angle or I opened up or something at a bad spot. But I did, and I just have to take care of it.”

“I came to the bench and it just didn’t feel good at that point. I didn’t touch the ice after that because we just had the shootout. I wanted to see what it was like the next day in practice. I was hoping it would be good enough, but it really wasn’t. It flared up pretty good and I needed some time away from the ice.”

The Kings are 1-0-1 without Regehr, having defeated Vancouver with a five-man defensive group on Saturday prior to last night’s 6-5 shootout loss to Anaheim. The elder statesman in the Kings room, Regehr has been remarkably durable throughout his career despite the demanding role that he performs. Since the 2000-01 season, the now-34-year-old has been held below 70 games only once in any full, 82-game NHL season. Apart from his rookie season, he has never played fewer than 68 games in any non-lockout year.

On Wednesday, he watched the Kings-Ducks game on television, a rare occurrence.

“[Watching on TV is] not a whole lot of fun, because you see the guys out there playing and you want to be out there helping and being a part of it, being a part of the team,” he said. “It’s really not a very fun feeling at all. Helpless is probably one of the best ways to describe it.”